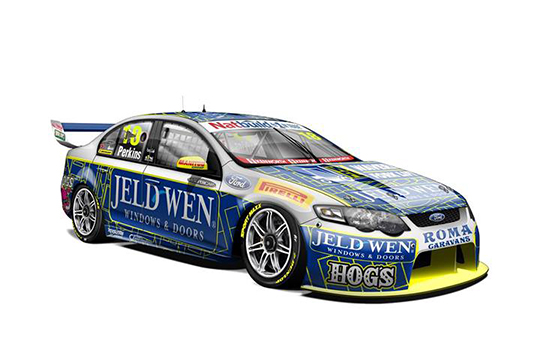 Team JELD-WEN has revealed a striking new look to its 2014 entry with new recruit Jack Perkins ready to begin his assault on the 2014 V8 Supercars Championship after a four-year absence from full-time driving.

Hungrier than ever before, Perkins has spent the off-season building on his already impressive fitness, and preparing for what is being touted as one of the toughest V8 Supercars seasons in history.

“This time of year is really tough for all drivers, as we’re so close to getting back into the race car after a long period of down time, and it’s really very exciting,” said Perkins.

“Normally, at this time of year I’d be up on the farm, working out in the paddocks, so it’s a very nice change of pace to be preparing for a full-time season of V8 Supercars.”

After a relatively lacklustre season for Team JELD-WEN in 2013, Jack knows he must provide consistent, positive results this year.

“I am certainly putting a level of expectation on myself. I need to be consistently in the top 10 to repay Charlie’s investment and decision to put me in the car,” said Perkins.

“My goal is to be deep inside the Championship top 10, and to be knocking on podium results on a regular basis. I have very good benchmarks in my teammates, and fully expect to be keeping pace with all of them.”

With everything possible done in regards to his preparation out of the car, Perkins says he can’t wait to get his first taste of the Team JELD-WEN Ford.

“What I’m looking to get out of the test day is to get comfortable in my new car, get to know it and understand what it will take to make it a fast racer,” said Perkins.

“That’s one of the real benefits of being a part of Ford Performance Racing. There’s a real depth of engineering talent, not to mention my three talented teammates in Frosty (Mark Winterbottom), Chaz (Mostert) and Dave (Reynolds). Getting to know my team is also very important, and I’ve been spending maximum time at the factory bonding with the guys. Now it’s time to hit the track, and I can’t wait!”

Perkins’ first appearance as a full-time driver in the #18 Team JELD-WEN Ford comes on Saturday, February 15, at the sydney.com V8 Supercars Test Day. The event takes place at Sydney Motorsport Park and is free for fans to attend.