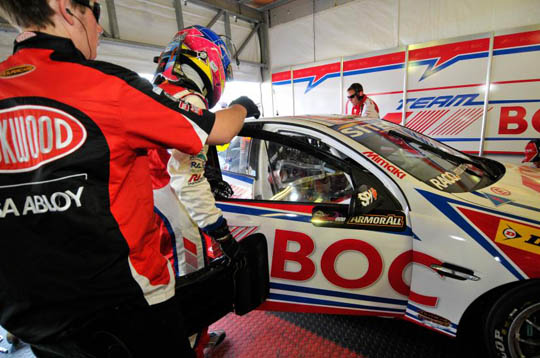 Jason Bright was running in the top ten qualifiers when he launched the car over raised curbs, designed to stop drivers cutting corners. The subsequent damage saw him drop to P16 in qualifying.

International Co-Driver Stephane Sarrazin made a safe start to the race and was just outside the top ten when he reported under-steer. Just a few laps later the Frenchman was in the wall and out of the race. Bright suspects lingering damage from the curbs was to blame.

V8 Supercars will be back in action from 2-4 November in Abu Dhabi.

Jason Bright
Team BOC
“In the qualifying session I hit the curb, which caused two damaged rims, a bent front shock and cracked the diff. I think that may have had something to do with Stephane going straight on at Turn 11 in the race.

“The drivers asked for the high curbs to be removed in the driver briefing but the officials chose not to remove them. They aren’t necessary on that turn as, at that section of the circuit, you can’t cut the track anyway.

“Apart from Stephane brushing the wall today I can’t fault any of his driving. He did a fantastic job and I hope he’s my teammate for next year’s event here.”

Stephane Sarrazin
Team BOC Co-Driver
“I went into the corner too fast and I touched the wall slightly. I rubbed the front-right suspension and the damage was too severe to repair and get back out.

“It’s a shame because we were going so well and I was pushing the car to the limit. Unfortunately that’s racing.

“Next year, if I get the opportunity to come back, I will jump at the chance to join Team BOC and be Jason’s co-driver. He’s been doing a really good job and he’s one of the quickest drivers out there.”