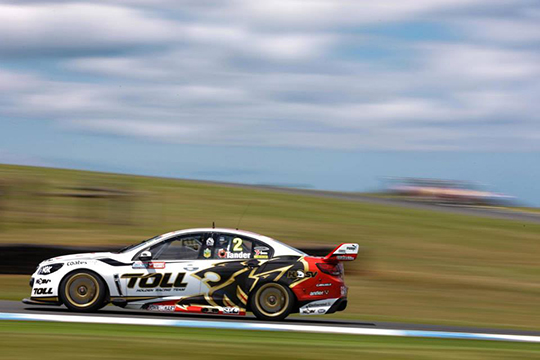 Garth Tander has claimed his second win of the season in a drama filled first race at the Sargent Security Phillip Island 360.

Tander was gifted the lead of the race when title rivals Craig Lowndes and Mark Winterbottom clashed on the last lap of the first half.

The pair battled over first position throughout the first half, the fight coming to a head at the final turn when the pair made contact as Winterbottom dived to the inside sending Lowndes off the track and down to 14th, while Winterbottom dropped back to fourth. The Stewards will be looking the incident post-race.

Tander steered his Holden Racing Team Commodore clear to lead at the break ahead of Team Jeld-Wen’s Alex Davison and which he held on to in the second-half to claim his 52nd career victory.

With two laps remaining, Fabian Coulthard passed Davison for second spot on the podium as the paired snaked through Lukey heights.

On just the fourth lap trouble was brewing throughout the field with Dodo Insurance Racing’s Dean Fiore being spun at turn four by the Norton Hornet of James Moffat. Fiore spun off the track but was able to re-join while Moffat’s car suffered a right rear failure limping back to the pits and taking no further part in the race.

The next lap, again at turn four James Courtney (Holden Racing Team) and Jason Bright (in his 200th event start) came together with Bright rotating off the track.

Scott McLaughlin’s Fujitsu Racing Commodore then suffered a tyre failure on the right front on lap eight and was the first of several of tyre casualties with David Reynolds (The Bottle-O FPR Ford), Tim Slade (Heavy Haulage Australia Racing) and Bright also having issues with the Dunlop rubber.

Championship contender Will Davison (Pepsi Max Crew FPR) spun off the track at turn ten, assisted by Shane van Gisbergen (Team Tekno VIP) with an investigation into the contact to be held at the conclusion of the race.

The safety car made its first appearance on lap nine to collect tyre debris from the circuit. A restart occurred two laps later.

The now compact field weaved its way through the opening corners cleanly until Bass Straight when Alex Prémat (Fujitsu Racing GRM) ran wide through Turn 3 and on to the wet grass. Prémat slid across the slippery surface, briefly kissing the edge of the gravel trap before he spun and the left rear quarter of his Commodore collided with the driver’s door of Courtney as he rounded turn four. Both cars came to a halt on the grass on the left hand side of the circuit. The side impact bar did its job but Courtney remained stuck inside his stricken vehicle leaving Prémat to pull him free of the wreckage.

Both drivers were taken to the medical centre but managed to escape serious injury with Prémat reportedly badly bruised and Courtney with soft tissue damage and muscle pain in his right leg, which took the brunt of the impact.

The safety car was bought out while the drivers were collected from the track with a restart occurring at the beginning of lap fourteen thus ensuring a one lap dash before the flag fell for the first half.

With three cars out, twenty five cars were left to line up on the grid for the second half of the race.

Early on there was contact between Alex Davison, sitting in second, and Fabian Coulthard in third. Coulthard made contact with the right rear door of the Davison’s Falcon through the back section of the circuit though Davison managed to hold his position.

A charging Winterbottom then found the rear of Coulthard’s car after the Kiwi ran wide off the final turn. With the right rear tyre in the dust Coulthard’s exit speed onto the straight was slower than that of the Pepsi Max driver and the Ford collided with the rear of the Holden. Coulthard was however able to hold his position.

After starting the race from 13th, Jamie Whincup (Red Bull Racing Australia) was able to claim fourth position and the championship lead with a pass on Winterbottom at turn four on the final lap. The Ford driver had no response for the Red Bull racer and settled for a fifth place finish.

Jamie Whincup (2623) has reclaimed the championship lead from Lowndes, now 14 points back. Winterbottom is third, 88 points off the lead, Will Davison remains in fourth, 159 point down and Coulthard retains fifth, 378 points adrift.

The V8 Supercars return to the track tomorrow morning at 1110 local time for the first of two qualifying sessions.