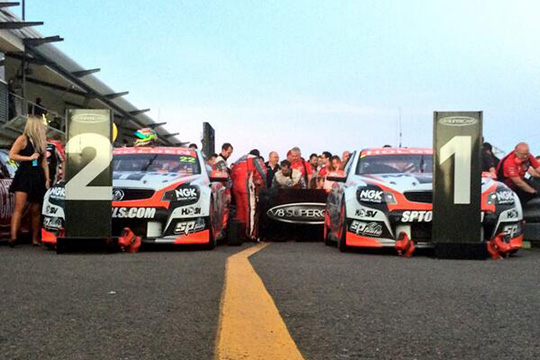 A year on since its last one-two finish Garth Tander has led home a Holden Racing Team one-two in the second race of the Townsville 500.

Unable to convert their earlier dominance in qualifying to victory in the opening race, Tander and team-mate James Courtney started from 11th and eighth in Race 21. Employing a longer first stint Tander put himself right up in to contention with the leaders, before taking the top spot from Lockwood Racing’s Fabian Coulthard on lap ten after the polesitter slid wide at Turn 3 on cold tyres following his pit stop.

Tander held station after a mid-race Safety Car was deployed to clear debris on track and remained out front for the remainder of the 125km race to take his first win of the 2014 season and his first since Phillip Island 2013, ending a 24 race winless streak.

After the safety car Courtney survived a fightback from Coulthard to take second at the flag, while van Gisbergen held onto fourth ahead of a chasing pack made up of Ford Performance Racing and Triple Eight drivers.

Having climbed from 12th to fifth, Chaz Mostert stood firm pursued by the Red Bulls of Craig Lowndes and Jamie Whincup over the closing stages, while team-mate Mark Winterbottom rescued his day finishing in eighth after a disastrous qualifying session saw him start from 19th.

Walkinshaw Racing’s Nick Percat had started from the front row but lost out with a slow pitstop. Percat dropped to ninth at the flag with Lucas Dumbrell Motorsport’s Russell Ingall rounding out the top 10.

Second-row starters Will Davison and Scott McLaughlin also dropped out of contention after drive through penalties saw them finish 16th and 14th respectively. An unsafe release saw Erebus Motorsport’s Davison strike Michael Caruso’s Nissan in pitlane, putting the Norton Hornet driver out of the race, while Volvo Polestar Racing’s McLaughlin lost three spots in the opening lap following contact from van Gisbergen before being caught speeding in pitlane.

Winterbottom continues to lead the Championship holding a 144-point lead over Whincup, with the final race of the weekend, a 250 kilometre encounter around the Townsville streets taking place on Sunday.

Qualifying and a Top 10 Shootout will determine the grid.