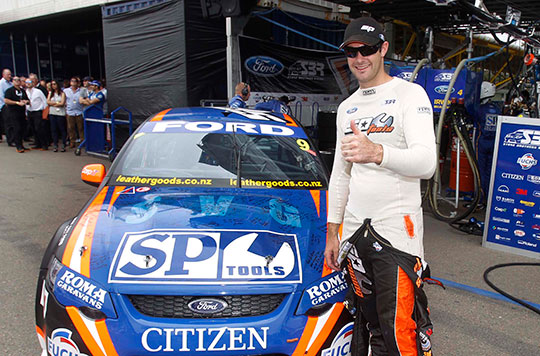 Stone Brothers Racing has finished the 2012 V8 Supercars season with mixed results in the final race at the Sydney Telstra 500, and it was Tim Slade and the Lucky 7 crew who again produced the star performance for the team.

Slade struggled a little with braking in this morning’s qualifying session, but still managed to clock the 8th fastest lap time, this placed him in a strong position for the start of the final Ford v Holden showdown.

The #47 Falcon got off to a good start, but was bumped on the opening lap and lost two places. Slade’s usual fighting spirit saw him recover well and he settled into 10th place.

An early pit stop strategy and solid driving throughout the 74 lap race saw Slade make his way up to 4th place. Although the team’s strategy meant he needed to conserve fuel in the final stint, he was never challenged for his 4th place and passed the chequered flag in a comfortable position.

Lee Holdsworth qualified his #4 IRWIN Racing Falcon in position 17 for Race 30. He was pleased to make it to the grid for the start after a broken diff yolk put him out of yesterday’s race before it started.

Holdsworth’s main aim of the day was to complete the race as high up the placings as possible to ensure he kept his 8th place position on the Championship table. He ran a relatively smooth race, stayed out of trouble and made his way up to 12th place. It was enough to see him close out the season in 8th position overall, just two points ahead of rival David Reynolds.

For Shane van Gisbergen his final race was not the ending he or his team had hoped for. He again failed to complete even one lap of the Olympic Park circuit after a drive line failure saw his #9 SP Tools Racing Falcon stop in the middle of the track.

In the 2012 V8 Supercars Championship all three SBR drivers finished in the top 10. Slade was SBR’s highest finsher in 5th place; van Gisbergen finished just one place behind in 6th and Holdsworth in 8th.

In the Team Championship SBR finished 3rd and Lucky 7 Racing finished 9th.
The end of the 2012 season marks the end of an era with Car of the Future being introduced in 2013. Whist it is also the end of the Ford era for SBR the team is excited about the opportunities that the 2013 season will bring.

“It’s been an at times tough year, especially in the middle of the season when we struggled to get on top of the car. I’m looking forward to getting a fresh chassis next year in what will be a new ballgame in V8 Supercars.”

“We have the opportunity to mix it with those up the front next year, especially with the resources that will be put into the new programme. It is a big job for everyone involved, including myself, but everyone is excited with what we will have on track for 2013.”

Shane van Gisbergen – Car #9 SP Tools Racing:
“It was pretty cool to have everyone sign my bonnet and we were all pretty excited to go
out there for the last race. Unfortunately something broke; I think it was the diff, on the first lap so we never had a chance.”

“It was a pretty average weekend, two DNFs and I’m pretty gutted. I’ve had a great time here with SBR and I have fond memories of this place. That’s the end of the season and my time in V8 Supercars but hopefully I’ll catch up with everyone again soon.”

Tim Slade – Car #47 Lucky 7 Racing:
“I guess the weekend as a whole was really, really good and it was a perfect way to finish the year off. We achieved the main thing we wanted to achieve and that was moving up to 5th in the Championship. Getting pole in the shootout yesterday was awesome and it’s great to have that on the CV now.”

“Today we struggled a little bit in qualifying, particularly with braking. Then in the race I actually got off to a good start but got pole-axed at turn two and I lost quite a few positions out of that. I was actually a little worried because we lost pit priority with Reynolds when he went past me.”

“The guys had a really good strategy and we managed to pit a bit earlier than the guys in front and jumped them in the pits. But that meant we had to save fuel in the last couple of stints. We couldn’t challenge the top three because we had to save fuel but we wouldn’t have got to that position if we hadn’t have run the strategy that we did.”

“Overall I’m stoked with a pole, a second and a fourth, and fifth in the Championship. It’s a great way to cap off the year. The guys have done a great job and hopefully we will all be together again next year. I want to thank James, Ross, Jimmy and the whole team for a fantastic 2012 season.”