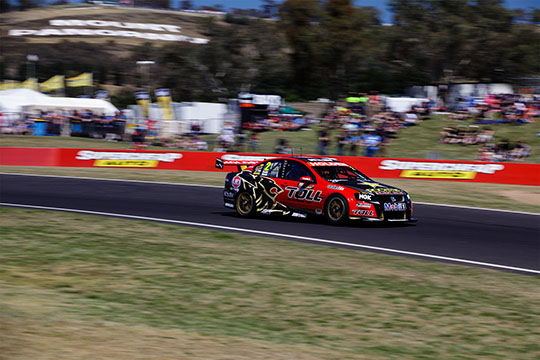 The Holden Racing Team has commenced their on-track preparations to defend their 2011 Supercheap Auto Bathurst 1000 title with three sessions of practice today at the famous Mt Panorama circuit.

Garth Tander and Nick Percat cycled through their practice schedule with both drivers making positive comments related to the performance of car #2 out of the truck.

Practice one saw Tander take the driving duties and the car was immediately competitive. He remained within the lead pack on the time sheets until the first 50-minute session concluded.

Percat took over for practice two and continued to work through the team’s set-up program. He made good progress as he circulated on older Dunlop control tyres – the exercise acting as important race simulation for the reigning Bathurst Champion.

The final session of the day saw Tander resume control and while their Commodore did not feature at the top of the order at the close of practice, both drivers and crew were very pleased with today’s result.

Courtney circulated with good pace in practice one and McConville contributed positively to the performance development of car #22 during the co-drivers only second session.

The Courtney / McConville entry finished in sixth position at the conclusion of practice three with both drivers eager to get back out on track when the Supercheap Auto Bathurst 1000 resumes tomorrow morning with the fourth practice session of the event commencing at 9:25am.