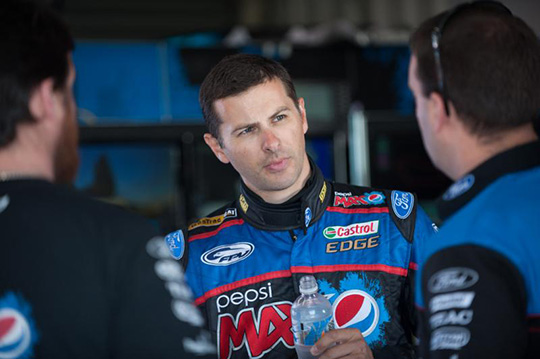 After pairing with Will Davison in 2013, Owen will join the reigning Supercheap Auto Bathurst 1000 winner in defence of his Great Race crown, with Winterbottom describing his endurance partner as “the best co-driver in the business”.

“Steve is highly-rated, highly-credentialed and is the only driver the team and I wanted to pair with to defend our Bathurst title,” Winterbottom said.

“He has experience of the team from last year when he also worked with my engineer Grant McPherson, so the only thing we have to do is get us both comfortable in the car and away we go.

“He will bring fresh ideas and has a lot of experience – in my opinion, Steve is the best co-driver in the business. He is the right person to help us as we try and go back-to-back at Bathurst.”

Owen partnered Jamie Whincup in the three 2010 V8 endurance events, finishing second in the Supercheap Auto Bathurst 1000 before winning at the Gold Coast 600, and the former two-time V8 Supercars Development Series Champion is aiming to go one better at Bathurst this year.

“I enjoyed working with FPR last year and know Mark, Grant and the rest of the engineers and mechanics from that experience so that means we can just get on with the job with no fuss,” Owen said.

“The team is obviously on form, they’ve won at every track on the calendar and now they’ve experienced a Bathurst victory so they know what it takes to get the job done.

“Mark and I are of a similar age and we’re both pretty relaxed guys so I am looking forward to the year ahead. There is no reason we can’t challenge for the overall Enduro Cup and of course, another win at Bathurst.”

“Steve completes our Enduro Cup line-up and while his confirmation with Mark is a mere formality due to his two-year deal, it finalises what I believe is a formidable four-car assault,” Edwards said.

“We’ve seen Mark and Dave (Reynolds), along with Dean Canto, excel when it comes enduro time. Jack has his seat off the back of impressive co-driver performances and Chaz is starting to grow into life as a factory driver so we have high expectations.”