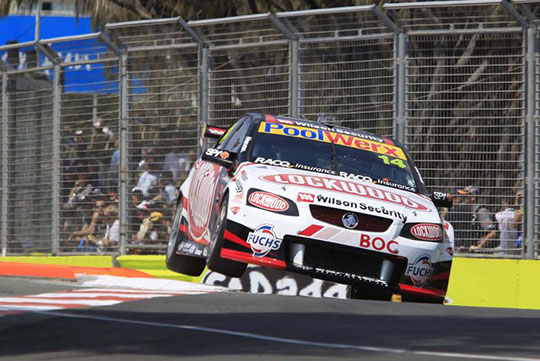 Starting a V8 Supercar race is no mean feat, as Lockwood Racing’s Nicolas Minassian found out at the Gold Coast today.

Initially Fabian Coulthard’s international co-driver nailed the tricky procedure, after being placed P7 in another stunning qualifying performance by Coulthard.

Behind him, however, James Hinchcliffe stalled, causing a red flag and lengthy delays. On the restart Minassian, who is more used to the rolling starts of the FIA World Endurance Championship, jumped early and then stalled as he backed off to redress.

Most cars speared right to get out of his way but an unsighted Franck Montagny did not see the stranded car and clipped the back, causing extensive damage to the left-hand side.

The crew is now working to have the car back to 100% for tomorrow’s qualifying, which starts at 11.15.

Fabian Coulthard
Lockwood Racing
“At the moment my luck is running in threes. Well technically I’ve served my three bad races in a row now so let’s move on from there!

“I’m pretty disappointed. Nicolas stalled on the grid and Montagny didn’t realize until the last minute and smashed the rear end of the car. Unfortunately that has finished our day of racing.

“The guys will repair the car tonight ready for tomorrow’s leg of the race.”

Nicolas Minassian
Lockwood Racing
“The red light was on for a very long time and the guy in front of me just moved and I moved with him. I realized the light was still red and I pulled the clutch back. When the clutch gets hot it doesn’t work. The car stalled and I was a sitting duck.

“I didn’t feel much of an impact; it felt just like a scrape and I didn’t think there was any damage that would prevent us from starting the race.

“I’m very disappointed and I’m sorry for Fabian and the team. Fabian did a good job today and unfortunately I screwed it up.”