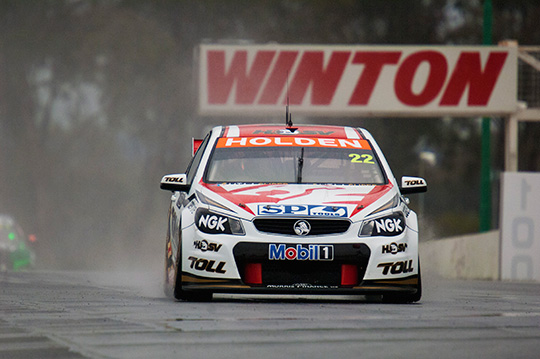 The Holden Racing Team has announced SP Tools will take over from Toll as its major sponsor for the 2014 V8 Supercars Championship.

The global automotive and industrial tool manufacturer has been involved in V8 sponsorship since the early 1990s through Australian distributor Austech Industries, and has been associated with Holden racing Team parent company, Walkinshaw Racing since 2007.

Transport company Toll Group announced in September that it is to step down from its major sponsorship of the Holden Racing Team at the end of the season to focus its resources on supporting new road safety initiatives, bringing an eight-year major partnership with Walkinshaw Racing to a close.

The SP Tools brand has been a primary sponsor with Stone Brothers Racing and its new incarnation Erebus Motorsport since 2008, but will leave the AMG-Mercedes customer team at the end of the year.

“The Holden Racing Team’s association with SP began in 2008 with the supply of air tools – most notably the team’s pit-lane race guns which enable our team to be a category leader,” Walkinshaw said.

“Our connection with SP’s Kevin Davis and Tom Tucker has evolved over time and we are proud that HRT uses their high quality SP Air and Hand Tools exclusively.

“2014 sees our relationship take yet another very important step forward and we are delighted to fully welcome SP Tools into our family.

“The company is innovative and proactive in the use of its sponsorship properties, and HRT and our partners will benefit from its sales and marketing activities.

“We look forward to sharing many more victories with SP Tools as the Holden Racing Team enters yet another exciting period in its rich history.”

Austech Industries CEO Kevin Davis said the opportunity to increase its support of the most successful team in the sport was important for the company.

“SP Tools is been a proud supporter of Australian motorsport and over time we have come to appreciate HRT’s professionalism and popularity,” Davis said.

“As a long-time supporter of the Walkinshaw organisation, we have enjoyed a lot of success including many race wins and two victories in the iconic Bathurst 1000; we look forward to more successes as a major partner of the team.”

Earlier this year, Walkinshaw Racing confirmed Supercheap Auto will continue as naming rights sponsor to its third entry which will be piloted by Tim Slade next season.