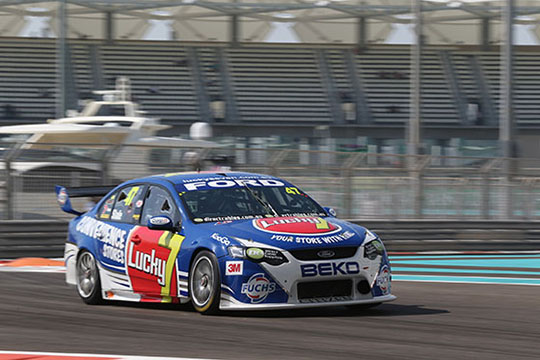 Tim Slade and the Lucky 7 Racing team are celebrating tonight after finishing in 3rd place in Race 26 at the Yas Marina Circuit in Abu Dhabi.

The #47 Falcon was gridded in 4th for the start of the race, just one behind team mate Shane van Gisbergen who had a podium finishes in each of yesterday’s races. Slade got a fast start and passed van Gisbergen and Davison on the opening lap to move into 2nd place.

The race was just two laps in when a crash on the exit of turn 17 caused a car to catch fire. At the re-start there were only seven laps of racing remaining of the 12 lap sprint.

Slade managed to hold off Davison, but a mistake at turn 20 meant that Davison slipped ahead of him going in to the final lap. Slade finished in 3rd place.

Van Gisbergen was hoping for another podium finish today, but after starting in 3rd dropped back to 4th on the opening lap. This is where the #9 SP Tools Racing Falcon remained until the conclusion of the 65km race, narrowly missing out on the podium.

The #4 IRWIN Racing Team again found themselves finishing in the top 10, making it three for the weekend. Lee Holdsworth qualified in 9th for today’s race and after getting off to a strong start had moved into 7th by the end of the first lap.

On lap 9 Tander overtook Holdsworth which saw him drop to 8th, and with little race time left he was unable to improve on his position.

A strong weekend of racing for the IRWIN Racing team means Holdsworth has moved from 10th to 8th overall on the Championship points table. Van Gisbergen still holds onto 5th place and Slade is just one place behind in 6th.

Lee Holdsworth – Car #4 IRWIN Racing:
“I got a good start but the balance just wasn’t there today so we didn’t quite go in the right direction. I still ended up eighth which isn’t too bad and seventh for the weekend. The main thing is we are moving forward at the moment.”

“After a few shocker rounds mid-year we’re starting to climb back up the ladder in the Championship. We’ve moved from tenth to eighth this weekend so there are a lot of positives to come out of this weekend so now we just need to find some speed.”

Shane van Gisbergen – Car #9 SP Tools Racing:
“Tim got a rocket start and I sort of settled into fourth to save tyres, knowing how they went off yesterday. Then we got the safety car and they got a good cool off and the race was shortened so that plan went out the window.”

“As soon as it went green light it was just flat out the whole time, but our tyres weren’t really there at the re-start. They came on good but our balance was a bit different.”

“It wasn’t quite as good as yesterday but still fourth is really good and I think we are still third for the weekend. It just would have been nice to finish it off with a podium.”

Tim Slade – Car #47 Lucky 7 Racing:
“It was a great weekend for the team, two podiums for Shane and obviously myself today. It’s a good feeling to be back up there, we haven’t been on the podium since May at Phillip Island. It’s been close and we’ve had a long streak of sevenths and then Gold Coast was strong for us. We just stepped it up a bit to be on the podium this weekend.”

“Our cars tend to suit this track pretty well, we did quite have the pace of the FPR and Triple Eight guys, but we were the best of the rest.”

“I got a good launch and got on the inside of Will. We had a little bit of a rub at the first corner and we went side by side through three and I ended up in front. My car was probably a little bit better then Will’s for the first two thirds of the race. I actually made a mistake at turn 20 and ran a little bit wide. Weather I would have been able to hold him off or not, I’m not sure.”