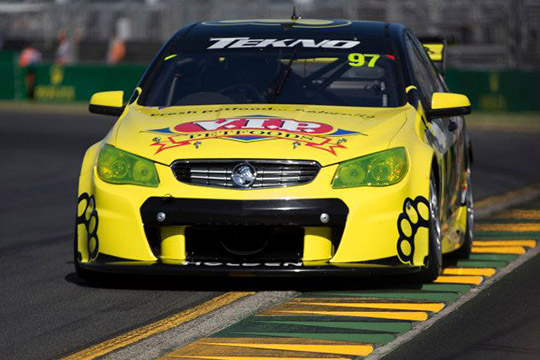 Shane van Gisbergen has mastered the tricky conditions in Melbourne to take victory in race three of the MSS Security V8 Supercars Challenge at Albert Park.

Rain before the start of the race saw the 27-strong field all starting on wet tyres, meaning there would be no compulsory pitstops, but the wet track conditions still played havoc as the lead for the race changed several times over the first four laps.

Van Gisbergen started from ninth, but the Kiwi who seems to excel in the rain, sailed through the pack and into the lead by the start of the second lap, only to then find the gravel just two corners later.

The Kiwi quickly recovered, and a lap later had passed the winner of race one and two, Fabian Coulthard, to vie for the lead with fellow rainmaster, Craig Lowndes. Van Gisbergen got his break shortly after as Lowndes slid wide and he re-took the top spot, pulling out a huge gap of 12.6s ahead of second placed Lowndes.

Van Gisbergen was joined on the podium by Tekno Autosports team-mate Jonathon Webb after Coulthard ran off the track a second time, the New Zealander having to settle for fourth ahead of David Reynolds, Jason Bright, James Courtney, Will Davison, Michael Caruso and Todd Kelly.

There was no let up further down the field either as the Nissan Altimas of Michael Caruso and the Kelly brothers jostled for position throughout much of the race, while Mark Winterbottom and Jamie Whincup who both started at the rear of the grid following earlier race penalties, finished 11th and 12th respectively.

With a 21-point lead over team-mate Jason Bright, Coulthard will lead the field away in the final race of the weekend on Sunday.