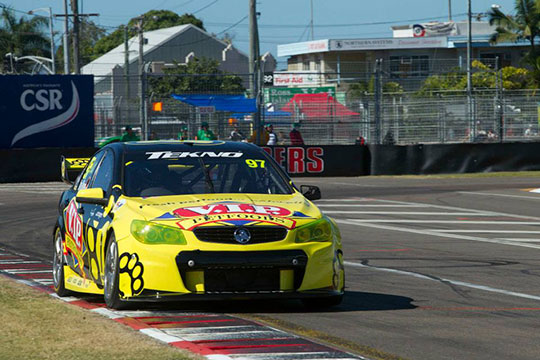 Shane Van Gisbergen has taken pole for the opening race of the Sucrogen Townsville 400, claiming his third pole position of the 2013 V8 Supercars Championship season.

In a two-part session, first an all in qualifying session followed by a Top Ten shootout, Van Gisbergen showed impressive pace in the Team Tekno VIP Holden, finishing both on top the time-sheets, while the two Red Bull Racing Holdens struggled for pace and missed the Top 10 Shootout altogether.

A mixture of strategies were in play as the session began with some drivers electing to start on wet tyres rather than the available hard tyres. Early in the session championship leader Jamie Whincup (Red Bull Racing Australia) led the times with a 1.14.1911. Five minutes into the session all four manufacturers were represented in the top ten with Maro Engel (SP Tools Racing) from Erebus Motorsport in fourth behind Fabian Coulthard (Lockwood Racing) and Russell Ingall (Supercheap Auto Racing). Jack Daniels Racing’s Rick Kelly rounded out the top five.

Tim Slade (Heavy Haulage Australia Racing) was the first to break into the 1.13 time bracket in the session with a 1.13.9587 with twelve minutes remaining. Jason Bright (Team BOC) quickly lowered Slade’s mark, to 1.13.7217, but the Erebus pilot remained in the top ten for the remainder of the session, eventually finishing in ninth.

Van Gisbergen, who had previously waited in the pits while other drivers circulated the track, jumped to first with a 1.13.6760 with nine minutes remaining in the session. As the rest of the field dove into pit lane, Van Gisbergen, Mark Winterbottom (Pepsi Max Crew FPR) and Ingall remained on track, Winterbottom overtaking for Van Gisbergen with a time of 1.136137.

Entering the final five minutes, Winterbottom sat atop the tree with Coulthard, Van Gisbergen, Bright and Will Davison (Pepsi Max Crew FPR) rounding out the top five. The last five minutes provided a flurry of activity on track with twenty-six cars all vying for a ticket to the top ten shootout.

The second half of qualifying featured a top ten shootout with the cars coming out in reverse order, to their finishing position in the first qualifying session. All drivers elected to use their soft tyres, the first time new soft tyres have been permitted for use this weekend, with the harder compound being used in the earlier session.

Alex Davison was first on track completing his lap in a time of 1.13.1304. Tim Slade was next, and after reporting a vibration mid-way through the lap, the Erebus driver lost time at the end, posting a 1.14.0769. Youngster Scott McLaughlin lowered the mark to 1.12.9956 but his time was then superseded by Jason Bright with a 1.12.9079. After an error at turn two David Reynolds posted a 1.13.7111. There were no such errors for Reynolds’ stable-mate Will Davison and he leapt to the top with a 1.12.7512. Next up was James Courtney who completed his lap in 1.12.9557 leaving the final top three to hit the track.

Fabian Coulthard fell short of Will Davison’s time with a 1.12.7573, while Mark Winterbottom went even slower with a time of 1.12.9384. Last out was Shane Van Gisbergen. Picking up from where he left the earlier session he posted a blistering time of 1.12.5139 to claim pole..

The V8 Supercars are back on track at 1535 local time.