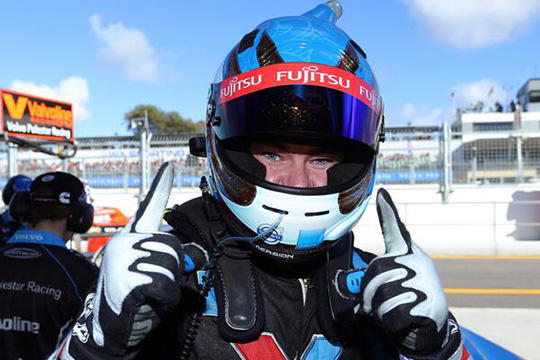 Scott McLaughlin has handed Volvo Polestar Racing its first V8 Supercars Championship win with victory in the opening race of the Perth 400.

The Kiwi driver came home first ahead of countryman Fabian Coulthard in the Lockwood Commodore and Chaz Mostert in the leading Ford Performance Racing (FPR) Falcon to give Volvo its first win in the Championship since 1986.

It was not all smooth sailing for the pole sitter after a slow start saw him get jumped by Craig Lowndes and Russell Ingall. Coulthard tried to get in on the action but had slot back into the line after getting stuck on the outside line for the first lap.

The early laps were dominated by Lowndes who took advantage of the battle behind him to develop a one and a half second lead over the rest of the field.

Ingall’s strong qualifying performance did not carry over to the race. The Lucas Dumbrell Commodore was overtaken by McLaughlin at the end of lap 6 and by lap 12 had been swamped by Will Davison and both FPR Falcons. By lap 16 he had dropped even further back after being overtaken by Jason Bright and David Reynolds.

Bright’s early pace suffered a blow when an off track excursion sent him to the back of the pack on lap 16.

The race was set to be defined by the enhanced tyre degradation present at the Barbagallo circuit and pit stop timing proved to be crucial to the final results. Overall the big winners were those who pitted later while championship leader Mark Winterbottom was among those who lost out by pitting early. Winterbottom was easily rounded up by McLaughlin on lap 25 and then overtaken by his teammate Mostert on lap 36.

McLaughlin’s Volvo didn’t appear to struggle with tyre wear at all and was able to pit late and round up the leaders by Lap 34. While Coulthard was able to charge through to second he was unable to catch the Volvo driver who was unchallenged in the second half of the race.

FPR achieved solid results despite not being able to catch the leaders with third and fourth place respectively.

Both Erebus Motorsport E63 AMG Mercedes’ placed in the top ten with Lee Holdsworth in fifth and Will Davison finishing in seventh after being the earliest car to pit on lap 17.

James Courtney brought his Holden Racing Team Commodore across the line in ninth and David Reynolds rounded out the top ten.

The round continues with another 100km race later today.