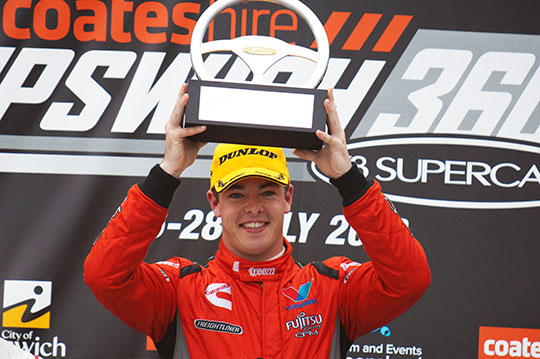 Starting from second place on a slightly damp track, McLaughlin got the jump on polesitter Jamie Whincup off the line and never really looked threatened on the drying track after that.

Untroubled by a Safety Car intervention early in the race for debris on the circuit, the Fujitsu GRM Holden driver held off the championship leader over the 32 lap (100km) race to win by 0.7s.

Completing the podium was James Courtney fresh from signing his new Holden Racing Team contract with third, ahead of Lockwood Racing’s Fabian Coulthard.

Chaz Mostert (Wilson Security Racing) was another rookie that gave a great account of himself. Starting from fourth, he moved up to second at the start, passing Coulthard and Whincup, before running wide on the damp track at turn three. Following the Safety car on lap nine, Mostert recovered from his earlier error to finish in sixth position, narrowly beaten over the line by Team BOC’s Jason Bright.

It was an all Ford Performance Racing affair rounding out the  top-ten, with Alex Davison coming home in seventh, while David Reynolds (The Bottle-O FPR Ford) despite suffering a flat spot on his left front after an early lock up managed to hold off stablemates, Will Davison and Mark Winterbottom who were locked in their own private battle.

The run of bad luck continued for Lee Holdsworth (Irwin Racing) with his Erebus machine caught up in contact with Scott Pye (ekol Racing) and Shane Van Gisbergen (Team Tekno VIP) on lap seven which resulted in broken left front suspension and yet another DNF.

On the same lap David Wall (Wilson Security Racing) and James Moffat (Norton 360 Racing) were also involved in contact, with Moffat the loser, ending up off track at turn two. The incident was investigated post-race, but was deemed not to have been in breach of the rules.

Whincup (1783 points) has extended his championship lead to 177 points over Lowndes who could only manage 12th. Will Davison remains in third (-283) with Winterbottom (-308) and Coulthard (-364) completing the top five.