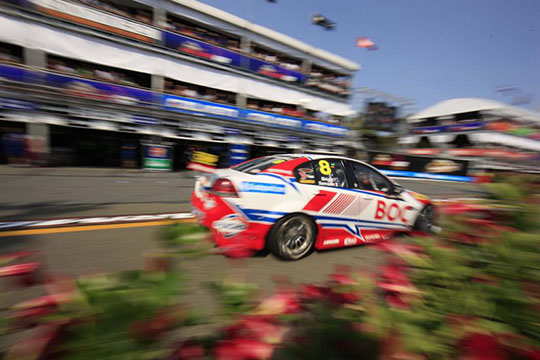 The pair, who finished 12th in today’s 79-lap race at Surfers Paradise, almost did not finish at all after James Hinchcliffe’s slow start caused a bottleneck off the grid. That saw Ricky Taylor spin onto his roof right in front of Sarrazin but the Frenchman’s lightning reaction avoided disaster.

His reflexes were again tested on the restart when Franck Montagny span into his path trying to avoid a stalled Nicolas Minassian. Another red flag and restart, this time with only 22 cars, saw Sarrazin opt to start from pit lane to avoid any more carnage but by the time he handed over to Bright on lap 39 he was up to 10th.

Bright found himself in the middle of a battle pack in the closing stages and, with just two laps to go, dropped back to 12th. Despite the late disappointment, however, Bright is pleased with today’s recovery after qualifying 21st.

Jason Bright
Team BOC
“Steph did an amazing job and, in my opinion, he’s the class of the field. He’s obviously had more experience than several other international drivers on street circuits but even so he really did an awesome job to get the team up so many positions.

“By the end of the shortened race we weren’t able to gain any more ground and
I’m not really happy with the result; we could have done better.  We had a pretty good car, especially in the last sector, but we struggled a bit through the chicanes.”

Stephane Sarrazin
Team BOC Co-Driver
“It was a really difficult start. A car crashed in front of me and I tried my hardest to avoid him. I actually did avoid him, but I was too occupied watching the tumbling car and I lost my train of thought and I tagged the wall on the left side, bending a suspension arm.

“We had a really strong race though. I pushed myself really hard but I made the smart choice not to take any risks in traffic and we caught several cars.

“It’s a good little track, very narrow though. I’m looking forward to Jason qualifying the team closer to the front tomorrow so we can have a proper crack at it.”