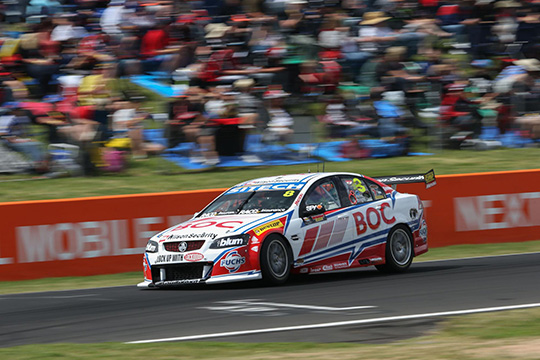 Bright had all but given up hope after Jones’ seatbelt got jammed in the lap-82 pit stop, dropping them from fifth to 16th.

A safety car followed shortly afterwards, however, and Jones was able to remain out whilst others pitted, getting him back up to fifth and right in the heat of the battle.

Disaster struck just a few laps before the final handover though. Jones reported a problem with the steering and shortly after ran off at Murray’s corner, damaging the front of the car.

The Team BOC crew made repairs and Bright finished, three laps down, in P21.

Bright will be back on track at the Gold Coast 600 from 19th-21st October.

Jason Bright
Team BOC
“We’re very disappointed with today’s result because we had a fast car all week throughout all the sessions. We had a minor hiccup in one of our pit stops, but we still managed to get up into P5.

“After Andrew’s incident on Lap 104, we did a driver change and I found the car suffering lots of shudder through Reid Park, but it turned out to be the splitter rubbing on the tyre, which caused us to re-pit immediately. We were in and out of the pits for the rest of the race.”

Andrew Jones
Team BOC Co-Driver
“Up until that incident, our day was going quite well. Every time I got in, I was able to move forward.

“From my prospective, it was looking like it was going to be a good day. We have to look into why I ended up in the sand.

“I came down to The Chase, got on the throttle to drive out of the left-hander, and had massive understeer. On the run down to the final corner I thought ‘that was odd, maybe I’ve delaminated a tyre.’

“I braked a little early and when I went to steer it wouldn’t turn and went straight ahead. There were no lock-up lights on.

“We had Brighty just circulating to get some points, which is obviously not what we come here to achieve. Up until that point we were in P5 and potentially in for a podium chance.”