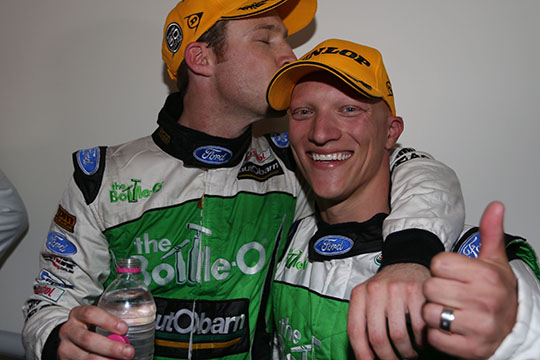 The Bottle-O Racing Team has fallen agonisingly short of claiming the 2012 Bathurst 1000 crown after David Reynolds and Dean Canto put in the drives of their careers to claim second place by a mere 0.3 seconds after 1000-kilometres of racing.

Reynolds stalked eventual race winner Jamie Whincup for the final 20 laps and the pair were never more than 1.5 seconds apart.

The Bottle-O driver got close to gaining the lead several times in the closing laps as both drivers battled the need for fuel saving with the desire to win the biggest event in Australian motorsport.

On the last lap the pair overlapped on a number of occasions and despite his best effort Reynolds was unable to snatch the win.

Second place delivered his first career podium and ensured that the factory Ford team has now secured a podium at every event for the last 12 months.

Earlier in the race Reynolds and Canto were delayed leaving their pit bay during a safety car pit stop.

They were unable to manoeuvre around a queuing car and instead of coming out ahead of Whincup, they lost around three seconds.

Aside from that delay the team enjoyed a relatively trouble-free day at after gaining ground off the start they spent the majority of the race in the top five and the last third inside the top three.

Long-standing team boss Rod Nash was overjoyed at the result and believes Reynolds’ performance will give him the confidence he needs to take the next step in his career.

The result was also just reward for Canto who for the last three seasons has driven faultlessly in the endurance races and contributed significantly to the team’s development.

Reynolds: “Driving to Bathurst I had a thought that I would pass a Triple Eight car on the last lap of Bathurst and while I thought it would be (Craig) Lowndes it almost became reality today. My rear tyres were pretty shot at the end and after the last stop we were playing the conservative game and saving heaps of fuel so we could attack. By the time we were ready to fire we had used the best of the car up so I couldn’t quite make the move. Overall we had a great day and I am really proud of everyone, especially Dean. We were an unproven duo a few weeks ago but I think after this weekend we’ve proven that we make a great team. This is great for Rod (Nash) too and I’m sure we are going to enjoy a big celebration tonight.”

Canto: “The car was strong all day and I knew it was capable of a big result. In the closing laps I was like all the fans and could sit back and enjoy the finish, though to say I was nervous would be an understatement. Our engineers were asking Dave to save fuel and when Dave said a few warning lights came up I was worried but in the end we had great pace but just couldn’t quite get it done. My day was actually pretty easy as the safety cars fell in the right spot and meant I did the minimum laps I needed to do.”

Rod Nash – Team Principal: “You can certainly put down today as a hard and nerve wracking day at the office. It was pretty cool to run the race down to the wire. We are the team climbing the ladder so for Dave and Dean to do a job like that is nothing short of sensational. Full credit to Jamie (Whincup) and Paul (Dumbrell) and the race started with both brands on the front row separated by a few tenths and ended the same way albeit in a different order from what we wanted. It was great to represent Ford and score a podium for Ford Performance Racing.”