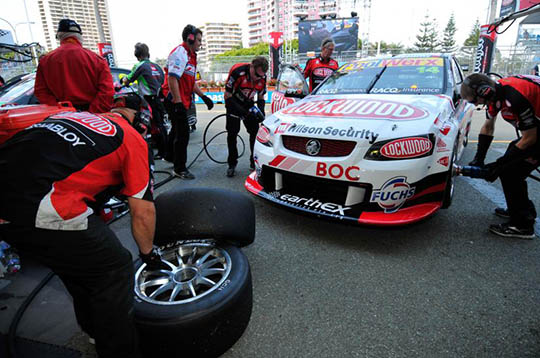 Mechanics who pulled an all-nighter fixing the Lockwood Racing Commodore were repaid today with a top ten finish at the Gold Coast.

The car suffered extensive damage in yesterday’s start-line incident but the team worked hard to have it rebuilt in time for Fabian Coulthard to qualify 20th this morning, despite some lingering problems.

International Co-Driver Nicolas Minassian had another risky moment at the start of the race, having to take evasive action after Peter Kox stalled in front of him. Once settled, however, he drove a solid 56 laps before handing over to Coulthard.

The Kiwi rejoined 18th and pushed hard to finish tenth at the chequered flag.

V8 Supercars will be back in action from 2-4 November in Abu Dhabi.

Fabian Coulthard
Lockwood Racing
“After yesterday’s incident, and the fact that the team was still working until 4:30am this morning, I think 10th is a pretty good result.

“We pitted a few laps from the end and came out in 18th position. I got a count down on laps with 15 to go but, before I knew it, it was the last lap. I pushed harder to pass the cars ahead of me and then we got back up to 10th place.”

Nicolas Minassian
Lockwood Racing Co-Driver
“Yesterday was such a disappointment and today I took a different approach.

“Fabian and I did the best we could with a car that wasn’t responding the best and it didn’t feel right but I’m very proud of the guys for fixing it and putting us back on the track.

“When I did my stint I moved up several spots and Fabian finished the job in the last five laps.

“I felt more comfortable in the car today and hopefully, if I’m asked to come back next year, we will do much better.

“Full credit to the team, it’s been fantastic and working with these guys is a breath of fresh air.”