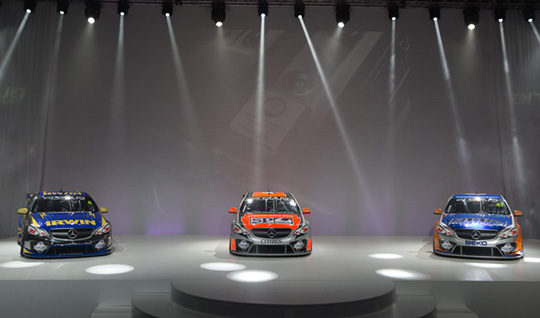 Erebus Motorsport has unveiled the world’s first Mercedes-Benz E63 AMG V8 Supercars at a ‘purple’ carpet launch at All Phones Arena in Sydney this evening.

The much anticipated event saw over 280 people pack the arena to witness history in the making.

“It’s not often in life you get to touch your dream,” said Klimenko.

“Having tonight’s launch in the same week as winning the Bathurst 12 hour, is like the icing on the cake.

“To love motorsport is to love the feeling of being alive. To hear, see and feel the excitement, and to be a part of one the greatest team sports in the world, is amazing.

“I love the fact that fans feel they are part of the team and always have a smile for you at the track, even when things might not be going exactly how you planned it.

“Walk along pit lane before all the excitement starts is like watching the sun come up, you know it’s just going to happen, your just waiting for it to begin.

“I love the challenge and I love the perfection of my cars, and of my crew,” said Klimenko.

“At the Bathurst 12 hour last year I spoke with a representative from AMG and he told me ‘I don’t believe this will ever happen.

“This project has been a dream of mine for as long as I can remember and tonight this dream has become a reality; and there is a sense of disbelief that we are here.

“The only way that we were able to achieve what we have is because of the dedication which is found in AMG, Stone Brothers Racing and Erebus Motorsport; they are the true heroes of tonight. We can look forward to being a major contributor to the V8 Supercars series.

“Betty believed in me and my ability to drive this project, and I respect her so much for giving me the opportunity to be part of this project,” said Maddison.

With just 109 days to build three brand new race cars, General Manager Ross Stone said it was a remarkable achievement by the team.

“Everyone at Erebus Motorsport V8 has worked so hard and because of their passion for building these cars, they have worked the required hours necessary to get them here tonight. It’s just a phenomenal effort by all.

“Betty is the first female owner in V8 Supercars and she has already proven that with her passion and determination anything is achievable. It is because of her belief in this project that we are here tonight.

“Now we are looking forward to getting the cars out on track on Saturday at the first test day and really seeing what they can do,” said Stone.

“Betty is a remarkable business woman with a particular thirst for motorsport. It’s also reasonable to say Betty’s incredible passion is infectious. As a result I am sure Erebus Motorsport will be well placed with this drive and commitment at play.

“This Saturday at Sydney Motorsport Park Erebus will debut its three Mercedes-Benz E63 AMG Supercars. This is a truly significant moment for Erebus, and V8 Supercars – after five years of hard work the Car of the Future era is now a reality.

“With a grid of 28 brand new V8 Supercars, record corporate support, a continually growing fan base and TV audience the sport has never been in better shape.”

“The team’s enthusiasm and their overwhelming will to win has not gone unnoticed and helped to convince us to develop the V8 Supercar based on the new E 63 AMG within the AMG Customer Sports Program.”

“The launch of this car is a milestone for this program as well as the Erebus Motorsport team, who have shown an impressive work ethic ever since the start of the project.”

“We wish them all the best for the upcoming season and hope that the race fans in Australia enjoy seeing and hearing the E 63 AMG,” said Fritz.