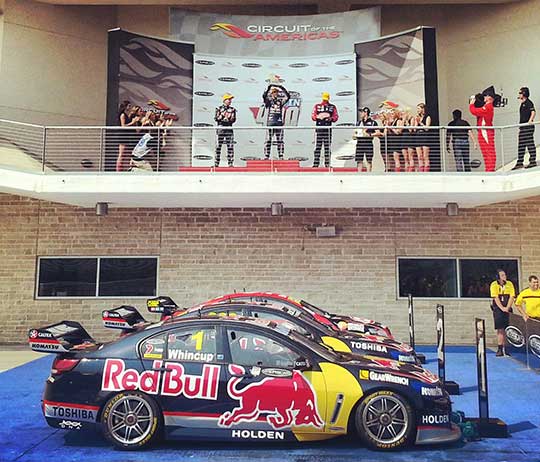 Jamie Whincup has led home team-mate Craig Lowndes to a Red Bull Racing Australia one-two in the V8 Supercars’ debut race at the Circuit of the Americas in Austin, Texas.

Starting the opening 100km race in Austin from second position, Whincup leapt into the lead before the first turn. Overtaking pole sitter Fabian Coulthard (Lockwood Racing), Whincup quickly established a margin only to have to lose it after a Safety Car was called on the first lap.

Young gun Scott McLaughlin (Fujitsu Racing GRM) was the first victim of turn one. Turned by Todd Kelly (Jack Daniel’s Racing) in the shuffle of the opening lap, McLaughlin crawled to the pits with damage to the left side of his Commodore. He eventually re-joined the field on lap six, five laps down. Maro Engel (SP Tools Racing) also took an excursion on the opening lap, ending up off track at turn three, momentarily stuck in the ditch, however he was able to extricate himself and re-join at the back of the field.

The race restarted on lap three and as the field accelerated away again Tim Slade (HHA Racing) was turned by Michael Caruso (Norton 360 Racing) in one of a number of incidents to be investigated post-race by the stewards. Lowndes and Coulthard battled for second position on the road, with the Red Bull driver eventually passing Coulthard on lap seven, but receiving a bad sportsmanship flag in the process for failing to give racing room, after the Lockwood driver was bumped off track in the manoeuvre.

Lee Holdsworth (Irwin Racing) was called into the garage with suspected power steering issues on lap eight and after investigation by the team was sent back out on lap ten. Former teammate Shane Van Gisbergen (Team Tekno VIP) was also forced into the garage on lap eleven after his car appeared to drop a cylinder. Although expected to be out of the race, Van Gisbergen was wheeled back out of garage two laps later.

The pit window opened on lap ten for the compulsory stop in which at least two tyres were required to be changed. While the leaders were the first to dive into the lane, others elected to stay out longer with Holdsworth, Jason Bright (Team BOC), Caruso and Scott Pye (ekol Racing) opting to pit on lap twenty-six in an effort to conserve tyres.

Two stops of interest were Will Davison (Pepsi Max Crew) under investigation for allegedly having the car controller working on the car during the stop, which is disallowed under the pit stop rules for this race weekend. Lowndes was also being investigated for having wheels spinning in the pit stop, however the investigation was dropped post-race.

In the dying laps of the race Mark Winterbottom (Pepsi Max Crew) suffered a massive lock up on the left front tyre at turn one, sending him off the track and dropping him from eighth to eleventh.

The Red Bull pair however proved unstoppable finishing ahead of pole sitter Coulthard.