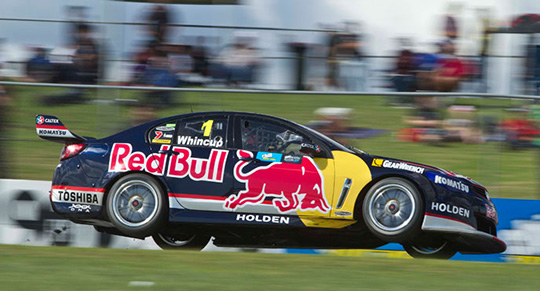 Red Bull Racing’s Jamie Whincup has claimed Pole Position for Race one of the Chill Perth 360 at Barbagallo Raceway.

In a spectacular final flying lap Whincup went from 17th on the timesheets to first with a lap time of 55.3985 edging out the Brad Jones Racing duo of Jason Bright (Team BOC) and Fabian Coulthard (Lockwood Racing).

Local boy Dean Fiore (Dodo Insurance Racing) out of the Lucas Dumbrell Motorsport stable jumped to the top with 14 minutes remaining with a time of 56.1659 but was quickly eclipsed by Red Bull Racing’s Craig Lowndes with a time of 55.7658.

As the clock counted down most cars ducked into Pit lane leaving only Will Davison on track to jump into Position three with five minutes remaining on the clock, after earlier suffering a massive lock up under brakes and spearing off the track.

As Will Davison came back into the lane, a host of other cars began departing Pit lane with four minutes remaining in the session. With 21 cars on track, space was at a premium as everyone tried to find space to get a flying lap done. The congestion on track inevitably lead to carnage with Wilson Security’s David Wall on a flyer sandwiched between the weaving Walkinshaw pair of Courtney and Supercheap Auto’s Russell Ingall resulting in Wall being punted first onto the grass and then sideways across the track into the sand trap, causing a red flag with two minutes remaining.

With the field lined up in Pit lane waiting for the green flag to commence proceedings, the two Red Bull cars of Lowndes and Whincup took the opportunity to put on a set of green tyres for their final flying lap, and departed the lane among the field as the exit was re-opened, with a touch over two minutes remaining on the clock.