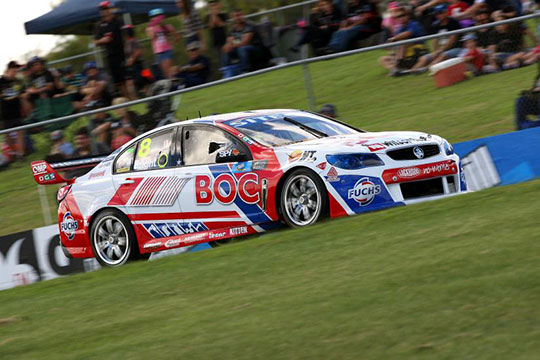 Team BOC’s Jason Bright has claimed pole position in the first of two frantic 15 minutes sessions at the Chill Perth 360.

Ford Performance Racing’s quartet of cars topped the timesheets for much of the session until Bright jumped to the head of the field in the dying minutes with a sizzling time of 55.2901.

Early in the session the surprise package of Tony D’Alberto (Team Hiflex) led the way toppling Jamie Whincup’s (Red Bull Racing Australia) time of 56.7681, lowering the mark to 56.6582. Whincup and D’Alberto traded fastest times, with D’Alberto holding the time to beat at the ten minute mark (56.3057) before Bright started his march forward.

In the final ten minutes of the session, the quick times began to stack up and the time to beat lowered in quick succession. At the top, the FPR cars traded places, with Alex Davison (Jeldwen Racing) eventually beating team-mate Mark Winterbottom (Pepsi Max FPR) by a mere 0.0017 seconds, posting a time of 55.4963.

With sixty seconds left Will Davison jumped to the top with a quick 55.2948, displacing the Red Bull racing duo of Lowndes and Whincup, only to have his time eclipsed in the final thirty seconds by Jason Bright with a time of 55.2901.