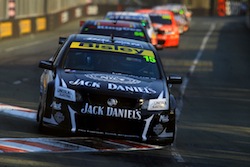 Will Davison and Mika Salo won the second of the Armor All Gold Coast 600 V8 Supercar races in a race dominated by strategy and debris Safety Cars. Davison held out Saturday winner Jamie Whincup over a final seven lap sprint to the flag.

By the end of the 102-lap race, the pair were separated by just 0.5 second. Davison’s win broke TeamVodafone’s 11 race winning streak.
The combined results from the two races saw Whincup’s co-driver Sebastien Bourdais win the Dan Wheldon Trophy for the second consecutive year.

Jack Daniel’s Racing experienced a frustrating second day of the Armor All Gold Coast 600 with Rick Kelly putting in another sensational qualifying performance to secure fifth grid spot for himself and co-driver Graham Rahal while Tim Blanchard qualified 23rd in the second Jack Daniel’s Racing car he shared with Marco Andretti.

After yesterday’s carnage, today’s start was relatively tame but not without incident, when Peter Kox failed to get off the line and was almost hit by Gianni Morbidelli. The safety car was immediately called and racing resumed after 2 laps.

Graham Rahal made a good start but dropped a spot on the opening lap and dropped to 6th while Marco Andretti avoided the startline incident and leapt up to 19th. Andretti took advantage of the lap 14 safety car to replace a flat spotted tyre and by lap 20 Rahal was 6th and Andretti 20th.

Five laps later Nick Heidfeld ran wide at turn 4 and Andretti pounced onto his rear bumper, the pair battling for many laps until Marco pitted on lap 35 to hand over Tim Blanchard. The previous lap Rahal pitted from 6th to hand over to Kelly.

By lap 40 Kelly was 16th and Blanchard 19th and they remained in those positions for the next 15 laps.

Trouble hit the Blanchard/Andretti car on lap 58 when Blanchard was forced to pit to have the alternator replaced, losing 10 laps and any chance of a decent result.

By lap 70 Kelly had set a blistering pace and worked his way up to 2nd before his final pitstop on lap 73 for tyres, a tank of fuel and to have a bucket of ice poured into his lap, as his cool suit had failed. Kelly resumed 13th.

The Blanchard/Andretti car was in the pits with differential failure and out of the race on lap 80.

Despite being held up by James Courtney who punctured his tyre into turn 4, in the closing stages of the race forcing Kelly wide, Rick went on to finish in 11th place.

Rick Kelly – “Today was a tough day. Qualifying was fantastic and for most of it and we had the old girl (car #15) up in second, which is what we needed. We bolted on another set of tyres and couldn’t get a better time out of it.

“Graham did an awesome job for us again today and he’s been such a pleasure to work with throughout the weekend. I couldn’t have picked a better guy and I’m so grateful with how well he worked with the team. We had a tough race and I just couldn’t get traction to the cars around me towards the end. There wasn’t a lot I could have done and my cool suit failing didn’t help and I felt pretty bad in the car.

“But I pushed as hard as I could. Then Courtney had a tyre go down into turn 4 and forced me wide and we lost three places. I felt we had a ninth in the bag, but Courtney’s mishap sent us back and that was the end of our day. To get 11th with a few dramas is good”.

Graham Rahal – “I though the car was better than yesterday and I held my own again. I kept the car up the front but we had a little issue with the fuel and the car wouldn’t fuel as quick as we need it and we lost some time there. But it was great to be here and I want to thank the Jack Daniel’s Kelly Racing guys and I hope to come back in the future”.

Marco Andretti – “I was still having fun, obviously we were battling altenator problems in the beginning so we were losing power and then my team mate might have hit a kerb and we ended up losing diff oil and we had to retire. It’s fun, we weren’t going to set the world on fire but it is all smiles here. It was tough to be quick and then I flat spotted my tyres. It was a great group of guys and thank them for having me”.

Tim Blanchard – “We didn’t get the result we were looking for and had a problem with the diff halfway through my stint. It was disappointing not to finish but I learned a lot about the soft tyres and I’m really looking forward to Abu Dhabi”.