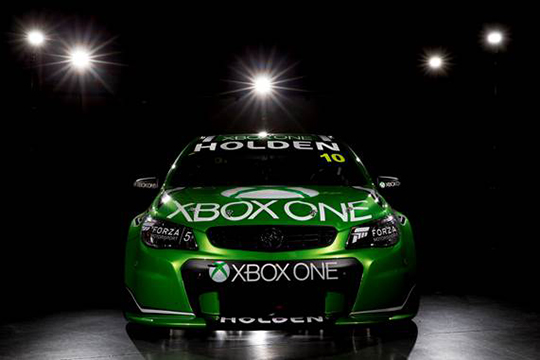 Triple Eight Race Engineering have partnered with Xbox Australia to enter the Xbox One Racing Team, ahead of launch of the highly-anticipated racing game, Forza Motorsport 5, which will for the first time include the Bathurst circuit, Mount Panorama.

The entry will be run separately of Triple Eight Race Engineering’s Red Bull Racing Australia cars, although the Xbox One Racing Team will be boosted by the support of Triple Eight team principal, Roland Dane, technical director Ludo Lacroix as the #10 car’s engineer and Mark Skaife as team mentor.

Three-time World Touring Car Champion, Andy Priaulx, currently driving the Metro BMW in the DTM Championship, is no stranger to the Mount Panorama circuit having previously raced three times at the Bathurst 1000. The 40-year-old Brit was also part of the Triple Eight’s Gold Coast 600 international co-driver line-up in 2010 and 2011.

With two DTM titles in 2004 and 2007 under his belt, Ekström ranks among the world’s best touring car racers. Bathurst will however, mark his V8 Supercar debut, although the 35-year-old Swede has proven on numerous occasions that he feels comfortable in other motorsport disciplines with successful runs in the World Rally Championship and NASCAR as well as clinching three titles in the Race of Champions.

“Andy and Mattias are two of the best Touring Car racing drivers in the world today and I can promise Bathurst and V8 fans that this will be one team to watch come race day in October,” said Triple Eight Race Engineering team owner, Roland Dane at the launch of the Bathurst wildcard car.

“There is no surprise that we love a challenge. When we heard this unique proposition from Xbox to turn everyone’s most-loved racing game into a reality on-track, we knew it was too good an opportunity to pass on.”