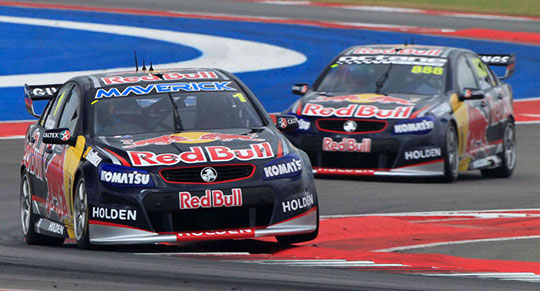 Fabian Coulthard and Jamie Whincup have secured pole positions in the opening two races of the Austin 400 at the Circuit of the Americas.

With less than 60 seconds left of the first session, the top spot changed four times, but it was Coulthard who lit up the timing sectors in his final run to take the top spot with a new track record of 1:32.5934.

Whincup will line up alongside Coulthard on the front row after coming out on top over team-mate Craig Lowndes, the Red Bull Racing Australia trading fastest laps before Coulthard’s flyer.

In the second of the two back-to-back qualifying sessions, Whincup’s lap time of 1:32.0311 put him a full second clear of the field with eight minutes remaining to go. The new track record was enough to keep him at the top of the timesheets, although team-mate Lowndes came close in the closing stages, just 0.26s back.

Mechanical issues kept Tim Slade from running in the second session, topping off a difficult day for the Erebus Motorsport V8 team.

The opening two Texas races, Race 13 and 14 of the V8 Supercars Championship take place later today, with a further two races on Sunday.