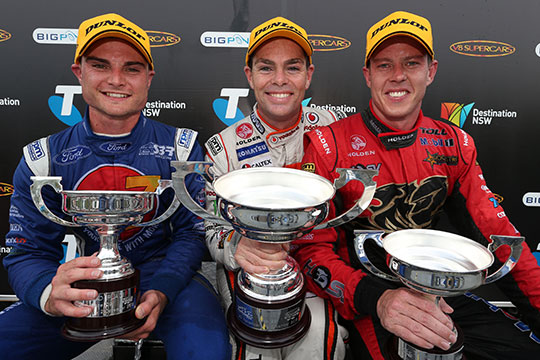 Stone Brothers Racing’s Tim Slade has produced an outstanding performance at the Sydney Telstra 500 taking out his first pole position and finishing on the second step of the podium in Race 29.

The conditions today at Olympic Park were hot, but the performance of Slade and the #47 Lucky 7 Racing team was even hotter. Slade secured himself a place in the Top Ten Shootout after Qualifying 4th. He produced a perfect Shootout lap and claimed his first pole position.

At the start of the race he slipped into 2nd place behind Davison going into the first corner, but with a long race he ahead wasn’t fazed and settled into the race. He took advantage of the yellow flag on lap 19 and pitted for fuel and tyres. He didn’t gain any advantage over Davison who also pitted under the safety car, and when he re-joined the race he was positioned in 5th.

It wasn’t long before the front runners needed to make their first stop and Davison was forced to pit for a second time after he bent his steering. On lap 29 Slade took the lead for the first time in the 74 lap race.

His second pit stop didn’t see him loosed any places and he held the lead for a total of 33 laps of the race. He ran out of water with 20 laps to go and a small mistake on lap 62 saw him drop to 3rd place.

Like the cars ahead of him he was on a fuel saving strategy, but that didn’t stop him fighting back and moving into 2nd place on lap 70. This is where he remained until the chequered flag.

For the #4 IRWIN Racing team and the #9 SP Tools Racing team the day was not so favourable with both Falcons back in the garage before the first lap was completed.

Lee Holdsworth failed to make the Top Ten Shootout after he was held up by another car in Qualifying. Then to add salt to the wound, the diff yolk broke during the race warm up lap and he didn’t make it back to the grid, instead retiring to the garage.

Shane van Gisbergen did qualify for the Top Ten Shootout and started Race 29 in solid 8th position. On lap one he was pushed into a wall which broke the lower control arm and his race was over. On his trip back to pit lane his Falcon veered left and while he managed to avoid hitting the wall, the Porsche Medical Car was not so lucky and the two collided.

Slade has now moved into 5th place on the V8 Supercars Championship table. Van Gisbergen has dropped down to 6th and Holdsworth remains in 8th.

Lee Holdsworth – Car #4 IRWIN Racing:
“Something broke there in the drive-line when I tried to take off from the line. I was selecting gears and it was spinning-up, but it was not driving the wheels.”

“We are trying to hold onto eighth in the championship and this certainly doesn’t help. We have come off the back of a podium at Winton and now to an absolute low here. We have a straight car for tomorrow and hopefully get some good points to round-out the year.”

Shane van Gisbergen – Car #9 SP Tools Racing:
“The start was ok; I settled down and passed Tony into one corner. Then he made a good run back and I hung around the outside of him, but he just ran me into the wall.”

“I think it was the bottom wish bone that broke and it ruined our day. When I got around the next corner I was just trying to get it back to the pits in case there was any hope of fixing it. I was doing about 20kms an hour and it veered left. I managed to stop before hitting the wall but the medical car crashed into me.”

“At least there was something funny about today because the rest of it was not really enjoyable.”

Tim Slade – Car #47 Lucky 7 Racing:
“I think my whole body does [wishes I didn’t make a mistake at turn 9] not just a small part. It’s been an awesome day and I got my first pole position. We’ve ticked a lot of boxes this year and that was another one.”

“The race ran fairly smoothly for us. I had my skirt on going into the first corner and probably gave Will a little bit too much there on the brakes. In the same breath I didn’t want to make a mistake and knew there was a pretty long, tough race as well.”

“We just pressed on and the car was pretty good. It was pretty hard trying to save fuel out in front because you don’t have another car to guide yourself off as a braking marker. I did make a little mistake there and I ran out of water with 20 laps to go, so I was cooking inside. I guess that forced a little mistake, but we saved enough fuel there in the last few laps to have a go at the boys in front and try to get back to where we were.”

“We got James because he was struggling there a little bit with fuel and closed the gap to Craig. But had I have closed it, it would have been another ting to get past.”