Ford Performance Racing has lifted the covers on the Pepsi Max Falcon liveries, marrying a fresh on-track look with a new driver line-up for 2014.

Winterbottom signed a new deal with the team late last year which will see him stay with FPR until at least the end of 2016. This year marks his ninth season with the factory Ford team where he will be joined by FPR young gun Chaz Mostert who steps up to the team’s #6 entry.

With more than 300 race starts, Winterbottom says he is looking forward to the challenge of a young, fast teammate and the new dynamic within the Pepsi Max-backed squad which will see him work with long-serving FPR race engineer, Grant McPherson.

“Chaz is probably the most similar teammate to me I’ve ever had, we’ve come from the same type of background so I have a lot of respect for him,” Winterbottom said.

“He hasn’t had cheques written for him and I know how hard he’s worked so it will be really good to drive alongside him.

“I am also looking forward to working with Grant as it is good to change and work with a different mindset as it will make us think more and will bring out the best in both of us. We will naturally need to work harder to build our understanding so there will be no laziness.

“Overall, the whole team is in the best mindset for the year ahead and it is nice to get some young hungry guys in the other cars as that pushes everyone.” 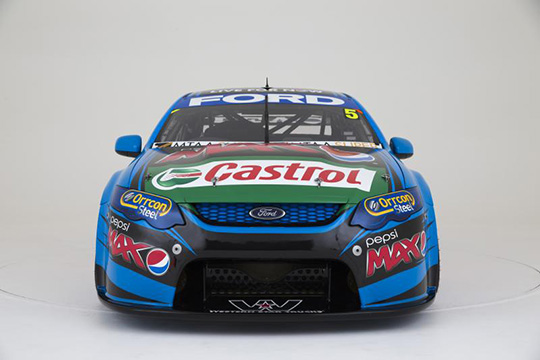 Mostert has been contracted to FPR since the end of 2011, but 2013 will be his first full V8 Supercars season after a late and unexpected call-up to the main series last year with Dick Johnson.

The 21-year-old gained valuable experience and scored a sensational maiden win at the Coates Hire Ipswich 360, demonstrating he had the talent to drive for Ford’s official factory team.

“Obviously this is a dream this year to be driving for the Pepsi Max Crew in car six and I am really excited to get some good results for the team and for myself,” Mostert said.

“I’m looking forward to creating some noise both on and off the track for the Pepsi Max Crew.

“There is an awesome engineering group here so the hard work ahead will be made easier by the support of such a great bunch of people.

“I can’t wait for Adelaide to come around. It is going to be a physically and mentally tough start to the year but all drivers start the year with zero points on the board so I will just give it my all and see where I end up at the end of my first full year in V8 Supercars.”

Making the transition easier will be the continuation of his working relationship with race engineer Adam De Borre.

“It is fantastic to have Adam come along with me as he proved last year how good he is as an engineer and I really enjoyed working with him,” Mostert said.

“It is a real honour for us both to get the call up to the factory Ford team and we both have things we want to achieve so it is good for us to continue together. When we work together it just feels like a couple of young guys hanging out so that closeness has cemented how close we work together.”

“Having Chaz around the team has already started to boost morale and bring a renewed level of enthusiasm and determination which has been a very welcome bonus,” Edwards said.

“Last year he proved his talent and while the step up this year and pressure is far greater, he knows he has the support of everyone working with him so the environment is the right one which is important when it comes to developing young drivers.

“Mark has spent time mentoring him over the last few years so their relationship is strong and he is really enjoying having a young driver in the other car. Also, the established relationships within our engineering group will provide a great working environment for everyone in the team.

“We have won at every track on the calendar, we know what it takes to win and the equipment and personnel is capable of doing the job. If we can make a better start to the season than last year we are well and truly in with a chance. We’re ready and up for the battle ahead.”