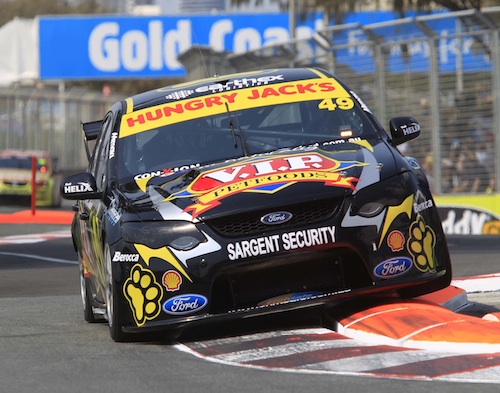 After a difficult qualifying session for DJR at the first race of the Armor All Gold Coast 600, the start of Race 22 was dramatic with 2 restarts and 6 cars failing to make it past the start/finish line.

In the middle of the 30 minute qualifying session, Team Norton DJR, suffered a broken tail shaft, similar to the incident at Bathurst. At the time, Moffat was sitting in 10th position, but after being unable to complete the last 15 minutes of session, he was relegated to 17th, despite having a quick car.

The V.I.P Petfoods Falcon of Steve Owen also had tricky start to the day, with the wall at Turn 1 collecting paint and the left rear door panel from the 49 car during qualifying. The crew made some quick repairs and sent him back out, finishing in 14th position.

Steve Johnson and Dean Fiore, for Jim Beam Racing also struggled through qualifying, and would start the race in 18th and 27th respectively.

The international co-drivers were the ones in the drivers seat to start the 300km this afternoon.

A stalled car on the start caused chaos involving 4 cars. The DJR crew were lucky to escape with just Gianni Morbidelli in car 12 suffering a minor steering issue from making contact with the wall to avoid the crash.

On the restart, the international drivers were unlucky again, with another car stalling, but only 2 cars involved.

The team had secured some strong positions with Boris Said (V.I.P Petfoods) sitting in 12th, Peter Kox (Team Norton DJR) in 13th, Max Papis in 14th and Morbidelli in 18th (both for Jim Beam Racing).

But unfortunately, the luck the team had at the start did not last long.

Just before the driver change, the power steering in Car 49 began to intermittently fail. This caused Said to curb hop, earning the American a black flag drive through. When Steve Owen started his stint, the car still did not feel right and Owen only completed 3 laps.

“We were moving along quite comfortably with Boris in the top ten, waiting for the pit window to open, when unfortunately we had a power steering failure. Which then meant Boris couldn’t get through the curbs. Obviously, this caused curb hopping and we received a drive through penalty. But our day was pretty much done when the power steering failed, and we just tried to managed that to see if we could hang on for some points. But it was too dangerous to be out there with no steering, so we decided to retire the car. But we had a quick car and we should probably have been in the top five today. We have plenty of tyres in the bank to use, and we’ll come out going for gold tomorrow,” said Blake Smith, engineer on car 49 after the race.

After 18 laps, the Team Norton DJR Falcon fell foul of the street circuits tight corners, with Kox putting the car into the tyre wall.

Peter Kox, international co-driver, Car 18, “In the beginning I could easily follow the race, but then I couldn’t maintain the pace and after the safety car I just pushed too hard. It was my own mistake, I just slipped and under steered into the corner and hit the tyre wall.”

Despite a drive through penalty (Papis for excessive curb use), bent steering (Morbidelli), and battery issues (car 17), the two Jim Beam cars were the only DJR team to finish the race. Coming home in 16th (Johnson) and 17th (Fiore), the team were relieved to have some positive news ahead of another grueling 300km tomorrow.

Nathan McColl, engineer, Car 12, “Fairly tough day at the office, but at least the car isn’t as damaged as some in pit lane. We’ve got good tyres for tomorrow, and plenty of good information having completed the race. We’ll come out swinging and qualify well and hopefully get a good result for all the fans.”

Steve Johnson’s engineer, Mark Fenning, “We were in trouble as soon as it become apparent that we had a voltage issue. This meant the car had to come back into the pits for a replacement battery. And that put us down a lap. The pain was further compounded by a drive through penalty. That sealed our fate for the day. But it did mean we managed to have Max in the car for longer than he would have been otherwise, which should hold us in good stead for tomorrow.”

Johnson/Papis, Fiore/Morbidelli, Owen/Said and Moffat/Kox will be back on track at 1115 tomorrow morning for the conclusion of the Gold Coast 600.