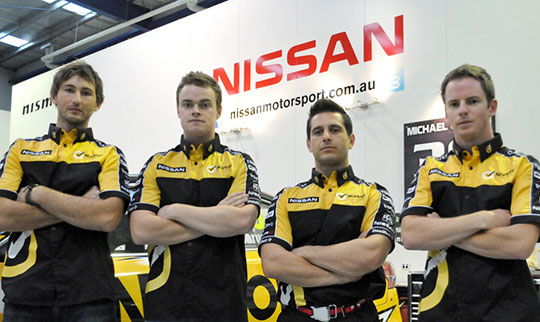 Nissan Motorsport has completed its co-driver line-up for this year’s V8 Supercars endurance rounds with the signing of Taz Douglas and Daniel Gaunt.

Douglas will partner James Moffat in the #360 Norton 360 Racing Nissan, while New Zealander Gaunt will drive alongside Caruso in the #36 entry.

Douglas and Gaunt are both competing in the Dunlop Development Series this year, driving for rival Ford teams, but both have previously raced full-time in the V8 Supercars Championship for Lucas Dumbrell Motorsport.

“It’s a great opportunity for me to drive with Nissan Motorsport in a factory team,” said Gaunt.

“The height thing is a big factor in the endurance races. We’re roughly the same stature, so I can’t wait to have a skid in the Altima.

“I haven’t driven one of the new-generation V8 Supercars yet, but from what I’ve heard, there are a lot of similarities to the old cars and a lot of changes as well. Apparently, the differences are similar to the V8 SuperTourer that I’ve been racing in New Zealand for the past year, so hopefully there’s no major transition phase. It should just be a matter of getting up to speed and learning how Michael likes the car.”

Caruso firmly believes the team will be in a strong position when the endurance season gets underway.

“I’m really excited to have Dan Gaunt alongside me in the #36 Norton Altima,” said Caruso.

“He has been doing a lot of driving at Sandown and Bathurst over the past few years, and we’re a similar height, so all those little things help in the endurance races.

“By the time we get to Bathurst, I think we’ll have a really good opportunity. The Altima is handling well, and it seems to enjoy high-speed circuits, so I can’t wait to get to the Mountain and strangle the life out of the car there.”

Douglas feels with his recent experience he and Moffat can deliver results.

“Whenever you can drive for a factory team, it’s exciting, and for me, it’s my first time with a factory V8 team, so it’s a dream come true,” said Douglas.

“It’s also Nissans first time back at Bathurst, so it will be great to be a part of it.

“I don’t like to put expectations on things. Moffat has been going really well in the championship so far, and the Nissans have been showing better speed than what many have expected. I think with our experience together, there’s no reason why we can’t achieve solid results.

“The Enduro Cup is a new thing year. It’s a good initiative for guys like myself to aspire to get. We get to race at the Gold Coast as well, and I raced there last year, so I think that will hold me in good stead.”


Moffat echoed Douglas adding that the pair could prove a surprise package.

“I’m really happy to have Taz with me in the season of endurance. I think he’ll be a really good fit on our side of the garage at Norton 360 Racing – not only for Sandown and Bathurst, but for the Gold Coast as well,” said Moffat.

“Taz and I have been mates for a while now. I was actually his mechanic for the 2005 Victorian Formula Ford Series. We’ve known each other for a long time and I’m sure he’ll fit in.

“Naturally, we want to go as well as we can and it’s fair to say that not many will consider us outright contenders. If we can sneak along, stay out of trouble, we should be able to get some positive results across the three races.”

The Norton 360 Racing endurance drivers will take part in the ‘co-driver’ practice sessions at Townsville, Ipswich and Winton events and test days leading up to the endurance races.