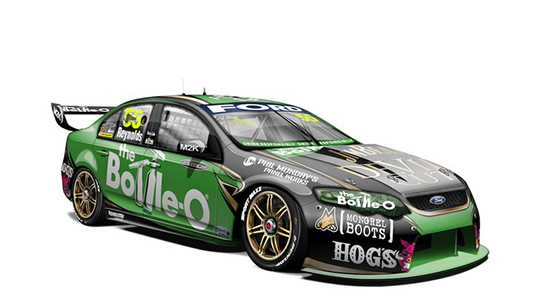 The Bottle-O Racing Team has taken the wraps off its 2014 Ford Falcon, complete with new sponsorship from Jim Beam.

David Reynolds returns for a third season in the factory Ford fold, believing he has all the right ingredients to regularly battle at the head of the field, after his maiden victory at the Gold Coast 600.

“We had awesome pace in the second half of last season so I plan to continue that from the start of this year,” Reynolds said.

“Initially I felt the off-season came just as I was hitting my straps but on reflection the time off was good as I will need all my energy for the busy year ahead.

“I know I definitely need to perform at a high level, be on the podium and on pole more often and win more races. I need to be on it so to speak at every race meeting.

“Our success will also depend on how other teams have progressed in the off-season but I think our pace at the end of 2013 bodes well for how we start this year so I have no reason not to think we will be in contention.”

Team owner Rod Nash urged Reynolds to use his obvious talent and become a regular contender for race wins.

“Dave has huge potential but we’ve made it very clear to him that we need a lot more of that Gold Coast level of activity throughout the season,” Nash said.