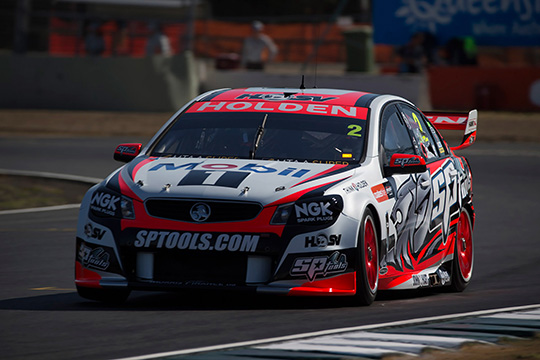 Holden rivals Garth Tander and Craig Lowndes will both go into the upcoming endurance season with new chassis.

Garth Tander will contest this weekend’s round at Sydney Motorsport Park in a brand new Holden Racing Team (HRT) Commodore.

The new Commodore, chassis number WR-21, is part of a planned development cycle, and contains a number of upgrades the team hope will see them back at the sharp end of proceedings.

Tander completed a shakedown test of the Commodore chassis at Winton, ahead of this weekend’s event.

“And it performed straight away, as we expected. All the systems worked straight out of the HRT transporter, and I felt comfortable immediately.

“It feels nice and responsive, everything you’d expect from a new Commodore.”

The new chassis, along with teammate James Courtney’s current car, will compete with an upgrade that originally debuted on Tim Slade’s car at Queensland Raceway.

Tander’s previous chassis will be equipped with the same upgrade in time for the Wilson Security Sandown 500 in September where it will be raced by Nick Percat and Oliver Gavin, leaving Percat’s ex-Tony D’Alberto Racing chassis to become a spare.

HRT rival Red Bull Racing Australia has also prepared a new chassis for Craig Lowndes which will make its debut at the Wilson Security Sandown 500.

The new chassis, codenamed 888A-039 was recently tested by Lowndes at the Norwell Performance Driving Centre.

“It’s a little hard to know where the car is at in terms of speed but it ran strongly mechanically and electronically,” he told Speedcafe.com.

“I’m looking forward to debuting it at Sandown and seeing what the car can actually do.”

Lowndes believes it’s the details that will make the new chassis an improvement over his current 19 month old car.

“Whenever you build new cars you learn and finesse things a little bit,” Lowndes said.

“The cockpit layout in this car is very clean in comparison to what I’ve currently got.

“The guys in the team have obviously had a really good think about where to place things to get the weight down and clean-up the plumbing work of the car.”