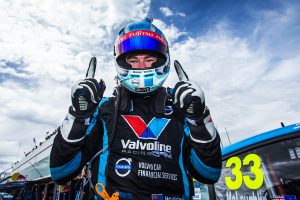 Scott McLaughlin took victory in dramatic fashion at the final race of the Plus Fitness Phillip Island 400.

McLaughlin was handed victory as Garth Tander’s Commodore ran out of fuel only a few hundred metres short of the chequered flag.

The result was especially shocking to the Holden Racing Team who were on the pit wall ready to celebrate as Tander led McLaughlin out of the final corner.

Despite running out fuel Tander still wrapped up second place ahead of Ford Performance Racing’s Mark Winterbottom who jumped his long term rival Jamie Whincup in the pits to secure third.

Whincup started on pole but had already lost the lead by turn two after a brave move by Scott McLaughlin saw the pair run side by side through the opening corners. Whincup ended up fourth after failing to have the speed to challenge the leaders.

Shane van Gisbergen put a difficult Saturday behind him to claim fifth in the final race.

Erebus Motorsport also ended the weekend on a positive note as Will Davison drove from outside the top ten to finish in sixth.

Jason Bright finished in seventh despite a pit lane altercation that saw him make contact with David Reynolds. The blame was directed at Reynolds who copped a drive-through penalty for the unsafe release.

Nick Percat and Michael Caruso came home in eighth and ninth respectively ahead of Craig Lowndes who had a tough day in the second Red Bull Commodore. A disappointing qualifying effort saw Lowndes start the race in fifteenth. Any attempt to salvage anything better than tenth was further hurt when he became a victim of double stacking during a chaotic series of pit stops caused by a safety car period.

The safety car was brought out on lap 15 after a mechanical failure saw David Wall drive straight off the road at the final turn and come to a stop just before the wall. The resulting pit lane chaos as the drivers came in was further amplified as a stranded Jack Perkins blocked the lane while he was double stacked.

The championship concludes with the series finale in Sydney on December 6-7.