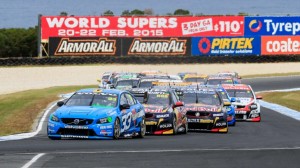 Scott McLaughlin has won the first race of the Plus Fitness Phillip Island 400 with a dominant display that saw him lead from flag to flag.

The young Kiwi held off a hard charging Craig Lowndes who looked to have the better car in the middle of the race but was unable to make a pass. The second Red Bull Commodore of Jamie Whincup rounded out the podium.

Whincup did well to hold off Holden Racing Team’s Garth Tander who drove from ninth to fourth, finishing less than a second off the podium.

David Reynolds managed to stay out of trouble and fly the flag for Ford Performance Racing in seventh after a disastrous race for stable-mates Mark Winterbottom and Chaz Mostert.

Championship contender Winterbottom had a massive moment at turn one as he tried to drive around the outside of Whincup. The lack of grip saw the Pepsi Max Crew Falcon plough through the grass and re-join in the mid pack. Although the race still seemed salvageable, the amount of grass picked up by the splitter soon caused overheating problems, forcing a pit stop. He ended up finishing in 24th, all but giving the championship to Whincup.

Mostert’s chance for a decent finish was lost after contact with Tander sent the Falcon spearing through the gravel at turn 2 leaving him to finish 15th.

Todd Kelly was the second of three Nissan’s in the top ten. In his 200th event Todd finished eighth ahead of Scott Pye and Rick Kelly.

It was tough going for the fourth Nissan of James Moffat who got caught up in Shane van Gisbergen’s mad rush through the field. Van Gisbergen started last and ended up spinning out both Moffat and Dale Wood in a desperate attempt to claw back some points. While the contact with Moffat was ruled to be a racing incident, his role in Wood’s spin saw him hit with a drive through penalty which sent him back to where he started.

The racing continues for the second 100km race today where Jamie Whincup can secure a record sixth championship title.