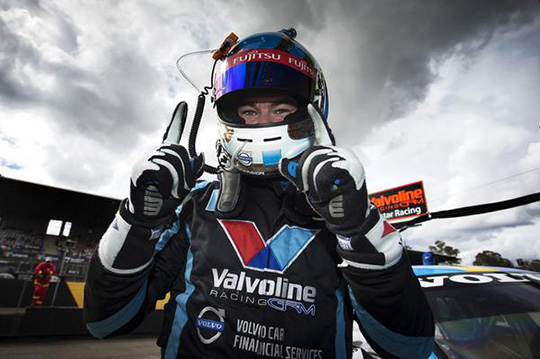 Scott McLaughlin has claimed Volvo’s second win of the season in a nail-biter at Sydney Motorsport Park.

The young Kiwi held off a hard charging Nick Percat to take the Sydney 400 chequered flag by just 0.3 of a second after rapidly degrading soft tyres saw him lose a 5 second lead.

McLaughlin took the lead after a frantic round of lap one pit stops after an incident between David Reynolds and Scott Pye brought the safety car. The Valvoline Racing GRM young gun controlled the race from then on in.

The incident was sparked after a touch from Mark Winterbottom turned teammate Reynolds into Pye and then into the concrete barrier on the exit of turn 3. Reynolds and Pye were forced to retire with heavy damage while Winterbottom was handed a Pit Lane Penalty for his trouble. Winterbottom’s race was effectively over as he was forced to settle for a last place finish.

Holden Racing Team driver James Courtney was also in trouble early after a broken transaxle forced him into retirement.

James Moffat narrowly missed out on a podium finish in his Norton Hornets Nissan Altima as he settled for fourth.

Yesterday’s double race winner Shane Van Gisbergen couldn’t recreate his race winning pace in the dry and finished seventh ahead of Michael Caruso. Caruso remains under investigation however after a coming together with Garth Tander saw the HRT driver spinning out top ten contention.

Craig Lowndes was the field’s biggest mover, dragging his Triple Commodore through the pack and into the top ten after a mistake in qualifying forced him to start from last on the grid.

Ford Performance Racing’s Chaz Mostert was the leading Ford home, rounding out the top ten ahead of the leading Mercedes of Will Davison.

The weekend’s results will see Whincup carry his championship lead over Winterbottom and Lowndes into the first round of the Pirtek Endurance Cup at Sandown in three week’s time.