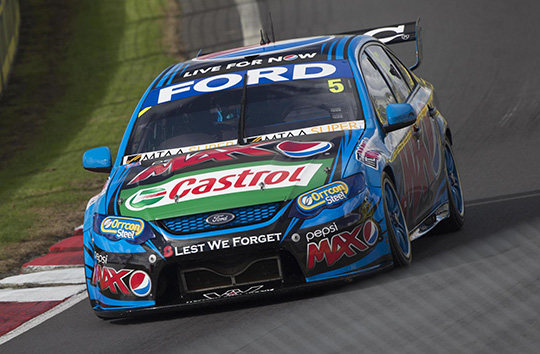 The driver of the #5 Ford Falcon led every lap of the 35-lap race and had to endure one safety car period to reach the top step of the podium. His win gave Ford its third race victory in the 27th race at Pukekohe.

Winterbottom got off to a quick start from the get go as he immediately passed pole-sitter James Courtney (Holden Racing Team) on the outside of Turn 1 after starting from second on the grid.

“It was really good,” Winterbottom said. “Obviously the start was important to beat him [Courtney] off the line.”

“Just to get the win is awesome. I’ll put my hand up, I drove bad yesterday and had a feeling of redemption to pay the guys – they were up all night changing bolts and uprights and rear end and you know it was a bad day yesterday but it’s awesome to turn it around into a win.”

Lap five brought despair for Tim Slade and his Supercheap Auto Racing crew as he suffered a left front puncture that would lead to a retirement after contact in Turn 6 with Jason Bright (Team BOC.) Bright was then penalized during the race, copping a pit lane drive-through penalty, a punishment that he viewed as unfair considering he was roughed up and forced off the circuit by Shane van Gisbergen (Team Tekno VIP Petfoods) on the previous lap, losing two places as a result – van Gisbergen received no penalty for his contact with the #8 Commodore. *

Bright lost places to Van Gisbergen and David Reynolds in the move,

Robert Dahlgren (Valvoline Racing GRM) brought out the lone safety car period of the event on Lap eleven. Dahlgren’s Volvo S60 erupted in a puff of smoke as he headed for the front stretch, the 34-year-old Swede parking his car at the end of the pit lane.

Team JELD-WEN’s Jack Perkins then went for a wild solo spin on Lap 20, keeping his car off the wall and in good enough to condition to soldier on. Seven laps later, Perkins’ left rear tyre then ripped to shreds, a calamity that the #18 team were able to remedy enough to have their driver finish in 22nd place, two laps off of the lead.

The top-three positions didn’t exchange again after the Lap 15 restart. Winterbottom gradually extended his lead over Courtney throughout the remaining 21 laps, leading the HRT driver by 2.9 seconds by Lap 33.

With the conclusion of this weekend’s second race, 200 kilometres have been completed of the 500 scheduled for the ITM 500. Race three of the weekend, another 100 kilometre event, will commence at 2:05pm EDST. The fourth and final race of the ITM 500 will run for 200 kilometres tomorrow.

* Update Post race, the Stewards imposed a 25 Championship point penalty deduction to Shane van Gisbergen for the clash with Jason Bright. The penalty has no bearing on the points count for the Jason Richards Trophy.