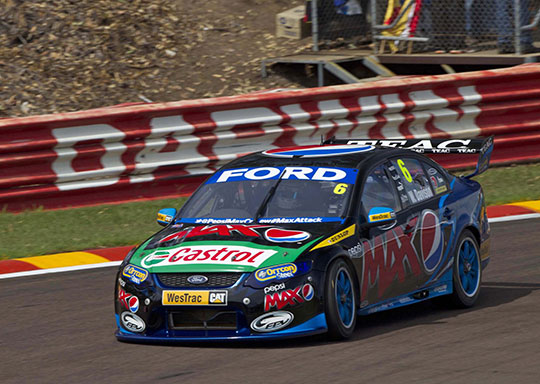 Mark Winterbottom has taken his first race win in over a year with victory in the second race of the SKYCITY Triple Crown at Darwin’s Hidden Valley Raceway.

In a convincing display Winterbottom, starting from second, fended off team-mate Will Davison before taking the lead on lap seven from pole sitter James Courtney (Holden Racing Team) and pulling away for a comfortable victory 6.01 seconds clear of Courtney and Craig Lowndes.

Despite contact with Lowndes at the hairpin on the final lap, Courtney held on for second position and his second consecutive podium. After starting the race from tenth, Lowndes sat in sixth after the pit stops but the tyre strategy played out perfectly for the Red Bull racer as he passed teammate Jamie Whincup for fifth before picking off Will Davison, who was struggling with his tyres.

Scott McLaughlin was the first to pit early for soft tyres after flat-spotting his hard tyres early on. The strategy had him running in clean air for the first dozen laps before others started to cycle through pit lane, but too many laps on the soft compound dropped him back down the order into 27th.

Dean Fiore and Rusell Ingall were the only two drivers to start on the soft rubber and both made substantial gains picking their way through the pack. By the time he pitted mid race for his hard tyres, Fiore led the race by a substantial margin until the tyres wore down and he dropped to 19th, with Ingall falling back to 26th.

Scott Pye (ekol Racing) was spun by Jonathon Webb and ended up at the back of the pack, eventually finishing a lap down on the leaders in last place.

The V8’s are back on track for the final race of the weekend at 1545 local time.