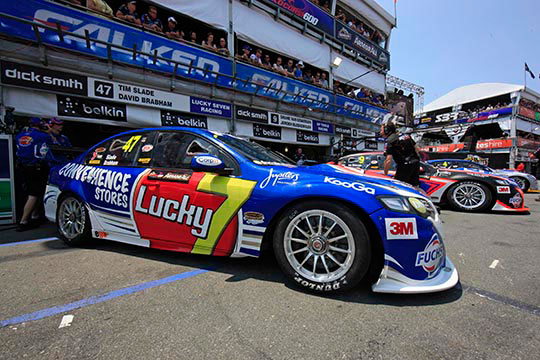 A near flawless race performance was produced today by Tim Slade, David Brabham and the Lucky 7 Racing Team which saw them finish in 4th place at the Gold Coast 600.

Slade Qualified the #47 Falcon in 11th position and it was Brabham who started the race. A two stop strategy along with a standout double stint by Brabham meant the team was in the lead pack when Slade took over driving duty. He lead for part of the race before a safety car on lap 75 saw Davison, Whincup and Winterbottom catch up, and they were on the hunt for his position. At the re-start the car lacked overall pace and they had to settle for 4th place at the chequered flag.

The IRWIN Racing crew performed overnight miracles to repair the extensively damage #4 Falcon and have it back on the starting grid after the team was caught up in yesterday’s opening accident.

Lee Holdsworth Qualified the car in 15th.Simon Pagenaud started the race and drove two solid stints without any incidents. It was up to Holdsworth to finish the 102 lap race and when he joined the race he slowly pushed his way up through the field and finished in 8th position.

The SP Tools Racing team had a tough day on track with damaged rims making driving difficult for part of the race. Shane van Gisbergen Qualified the #9 car in the top 10 and his co-driver Jeroen Bleekemolen started the race.

While Bleekemolen had good speed for the first part of his stint his tyres went off and he struggled to hold position for the second half of his stint. When van Gisbergen took over the driving the vibration caused from bent rims meant he had to work hard to control the car.

When the problem was fixed during a pit stop he found he had good car speed but was some distance behind the front runners.  He battled on and found himself finishing Race 23 inside the top 10 in 9th position.

Van Gisbergen and Slade positions on the overall points table remain unchanged and they sit in 5th and 6th respectively. Holdsworth has dropped one place to 10th.

Car #4 IRWIN Racing:
Lee Holdsworth –“A stellar effort to get the car back on the track by everyone at Stone Brothers Racing. To have a really good race car was just brilliant.”

“Yesterday was such a shame as we not only lost the car for the race, but also the information from running that race. It really would have set-up us up for a stronger run this morning in qualifying.”

“We learnt a lot from the qualifying session, although we didn’t post the time we wanted. We made some changes after qualifying and it was spot-on for the race.”

“I really wanted to get a result with Simon again this year, but I hope he’s keen to come back because he’s right at the top of my list.”

Simon Pagenaud – “Congratulations to the boys for getting the car back together as from what I saw it was destroyed. The car was really good to drive and I enjoyed my time at the wheel.”

“I have to say Lee is like a rocket ship at the wheel. He had a fantastic drive and got us up to eighth. I’m really happy with the result after the situation we faced after yesterday’s race.”

“It’s been great teaming up with Lee again and I have enjoyed driving the IRWIN car. I would be more than happy to come back with Lee again next year.”

Car #9 SP Tools Racing:
Shane van Gisbergen – “Jeroen did a great job at the start but then his tyres went off and he started to struggle. Then with strategies there were guys on good tyres so we started to drop back a little bit due to that.”

“When we came in for a stop and our rims were actually oval shape so there was a massive vibration because of it. There was big vibration and I tried to push but I was almost in the wall at every corner. So I pitted again but I had the same problem straight out of the pits.On the last stop we changed the tyres again and finally the problem was fixed. I had good speed and the car was fast but unfortunately we were a fair way back and I had to fight my way back through.”

“I think the rims must have got damaged when I used the kerbs in qualifying. But that aside, the GC600 is always a great event and I had a great time racing with Jeroen. It was his first time in a V8 Supercar and he did a really great job all weekend.”

Jeroen Bleekemolen – “Today was not too bad and we had a decent result but obviously we were hoping for a little bit more. I had a really good start and a really good first part of my stint where I could keep up with the lead guys. Then sort of half way through my stint I got some problems and I think one of the tyres got damaged from the kerbs.”

“This weekend it was really nice to be a part of this race and hopefully I get many more opportunities. It’s such good racing, it’s so close and the cars are really fun to drive. It’s a great event and it really was a great experience.”

Car #47 Lucky 7 Racing:
Tim Slade – “We lead for quite a few laps and really that was all to do with the strategy that Wes and Luke came up with and Brab’s performance that put me in that position. All I had to do was pretty much drive it to the end.”

“Brab’s did an awesome job and I think he was in the car longer than me in that race which is a massive ask of a guy that is a non-regular. He doesn’t drive our cars all the time and this is such a difficult track.”

“We just didn’t quite have the pace of the first few which is the same as it was yesterday, but I think we were the best of the rest. Overall I’m really happy and I think we were 3rd overall on points for the weekend. 4th and 5th is great especially on a weekend like this where there are so many elements thrown at you. It’s great for the Championship – it’s a whole lot of points. We just have to work on a little bit of speed.”

David Brabham – “I had a great run today, got off the line ok and didn’t get into any trouble. The car that stopped at the start was right in front of me and I could see that he jumped a little bit before he stalled. So I thought that sometimes when people do that they do cut the engine and stall it. I was kind of half ready for it, so once I got going all I was concerned about was whether or not I could get a good enough start. If the guys on my right and I all tried to go into the same gap it would have been a disaster but luckily there was enough room.”

“Then it was just a case of settling in and picking one off at a time. The team obviously decided to come in on the second safety car but not change drivers and then I had quite a long second stint. The pace seemed to be pretty good and we were looking quite good actually.”

“Then when Tim got in and it all sorted out we were in the lead. It was a great effort by the Lucky 7 team to form a great strategy. In the end we just didn’t quite have enough car pace and 4th was as good as we were going to get. Over the weekend we had the 3rd highest points so it was an awesome effort by the team and it’s great to be back with Stone Brothers again and have the opportunity to run up the front.”