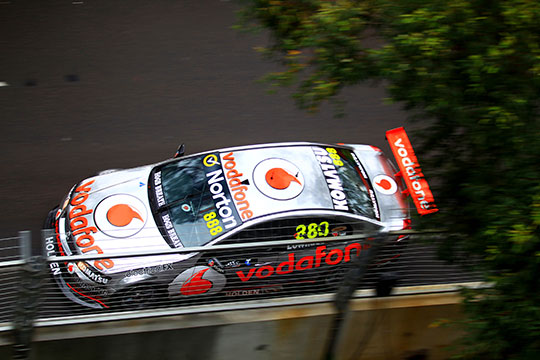 Craig Lowndes had a great day in the office, charging from 23rd to first in today’s opening leg of the Sydney Telstra 500, while Champion elect Jamie Whincup finished a solid fifth.

With rain falling prior to the 20 minute qualifying session, lap times improved as the street circuit dried out.

Both TeamVodafone drivers struggled with traffic over the closing laps of qualifying and finished uncharacteristically outside the top ten. Whincup qualified 14th and Lowndes 16th.

Fighting against the heat and heavy traffic, both TeamVodafone drivers utilised the four safety car periods to climb through the order. Lowndes was given priority in the pits during the final pitstop and returned to the track in second position.

After battling front runner Tim Slade for several laps, Lowndes moved into the race lead on Lap 61 and took the chequered flag ahead of the Ford driver and James Courtney to record his 89th career win.

Lowndes now sits second in the Championship three points ahead of Mark Winterbottom on 3409 points.