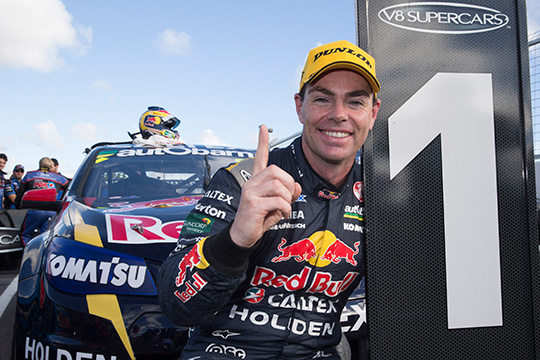 Red Bull Racing Australia is back to winning ways after Craig Lowndes controlled win in the second 100 km race of the Perth 400.

Lowndes produced a masterful drive over the 42 laps, maintaining his lead through the mid-race pit stops, to take the win ahead of Championship rival Mark Winterbottom.

The results show a return to form for Red Bull following a struggle for performance in recent rounds, with Jamie Whincup making up one spot after starting in fourth to claim the final step on the podium, and Lowndes back up to second spot in the championship standings.

“We certainly had a mixed day,” said Lowndes.

“In Race One we had a strong car at the beginning but we started chewing through the rear tyres more than we’d expected so came in to pit and changed all four tyres. Then we got back out in traffic with disturbed air which hurt the front and we were suffering understeer.

“For Race Two we sat down and really thought through what we needed which was longevity so we softened the car off which was a much better decision and we got the result we were looking for. Tomorrow we’ll continue working hard to get the performance, it doesn’t come easy but today was a good indication of team effort.”

At the start Whincup was quick off the line but couldn’t pass Scott McLaughlin (Valvoline GRM Racing) despite having the inside line through turn 1. The pair ran side by side for the first few corners before Whincup conceded the position.

The leaders’ positions remained the same until a round of pit stops saw Winterbottom jump to second and McLaughlin drop to fourth where he would stay for the rest of the race, unable to match the leaders’ pace. Whincup held on to third place but was unable to mount a serious challenge on Winterbottom.

Lockwood Racing’s Fabian Coulthard charged from tenth to fifth and was one of the race’s bigger movers along with Scott Pye who raced his Dick Johnson Racing Falcon from 14th to 7th.

Ford Pepsi Max Crew’s Chaz Mostert battled with Coulthard in the second half of the race but was unable to hold the Kiwi off and had to settle for sixth.

James Courtney claimed a consecutive top ten finish for the Holden Racing Team in ninth, with David Reynolds (The Bottle-O Racing Team) and Ingall rounding out the top ten.

The Erebus Motorsport pair of Lee Holdsworth and Will Davison briefly ran first and second after the field had pitted in an attempt to stop as late as possible to maximise their speed in the later stages of the race. Unfortunately they left their stops too late and were both unable to make the top ten. Will Davison dropped the most places after pitting last, finishing 18th after starting in 6th.

Jack Perkins attempted to repeat the strategy that saw him gain a number of places in race one but was forced to make an unwanted pit stop to replace a left rear puncture on lap 24 which dropped him to the back of the field.

Perth local Garth Tander (Holden Racing Team) was once again unable to break into the top ten having to settle for an 11th place finish ahead of the first Erebus Mercedes of Lee Holdsworth in 12th.

It was another disappointing set of results for the Nissan drivers with Norton Hornet Michael Caruso the highest placed finisher in 15th. Todd Kelly’s Jack Daniel’s Racing’s Altima appeared to have pace as he made up nine positions but starting from the back of the grid hurt his chances of getting a good result.

The Perth 400 concludes with a 200km race tomorrow.