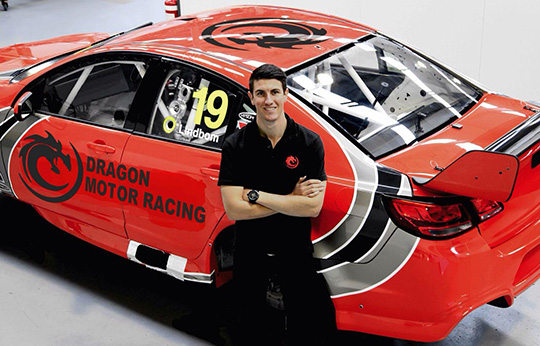 Kristian Lindbom has been named as the first confirmed driver for Dragon Motor Racing’s wildcard entries in the V8 Supercars endurance rounds.

Dragon Motor Racing has been granted three wildcards by the V8 Supercars Commission, one for entry into the Wilson Security Sandown 500 and two for the Supercheap Auto Bathurst 1000, with Lindbom set to compete in both races in the #19 car.

Despite only a limited Dunlop Series campaign with Evans Motorsport in 2013, Lindbom finished as the highest placed rookie and the 24-year-old is set to compete in the upcoming V8 Supercars Dunlop (Development) Series round at Queensland raceway behind the wheel of another ex-GRM chassis also run by Dragon Motor Racing.

“Most kids in Australia either dream of going into Formula 1 or racing at Bathurst.

“My dream was F1 and that didn’t happen, so now I’m getting that second goal. It’s a huge opportunity.”

In June, Lindbom was given the opportunity to test Dragon Motor Racing’s ex-PWR Holden at Winton Motor Raceway, where the team were assisted by GRM co-drivers Greg Ritter and Alexandre Premat, with GRM team boss Garry Rogers watching on.

“I think driving at that test day did more for my career than anything else I’ve ever done,” Lindbom told Speedcafe.com.

“Garry is obviously advising Tony quite a bit and it was good that he was there.

“I think that test is the reason I’m driving at Bathurst.”

Lindbom, whose career also includes spells in the Australian Formula Ford Championship and Formula 3 hopes to follow in the footsteps of his good friend Nick Percat, who spent three years as a co-driver before gettting the call up to the main game.

“I definitely want to do a solid job to show that I can at least be a good co-driver,” said Lindbom.

“Becoming a co-driver has been a big springboard for a lot of drivers.

“If you look at Nick, he was a professional co-driver for three years (with Walkinshaw Racing), which gave him the opportunity to race in Porsches and the Development Series.

“For me that’s a goal that is very achievable.

“It means that I don’t have to set the world on fire in the race and pass Jamie Whincup.

“I just need to do a solid, professional job and bring the car back in a good state.”

Lindbom’s co-driver and the #29 entry driver line-up are expected to be named shortly .

New-Zealand-backed Super Black Racing which has had one wildcard approved for the Bathurst 1000, is also expected to reveal details of its drivers soon.