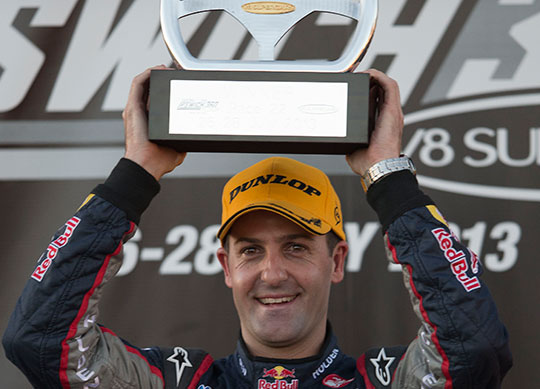 Jamie Whincup has taken victory in the Coates Hire Ipswich 360 opener becoming the first driver to convert a half time lead in the 60/60 Super Sprint format into a second half win.

After landing pole, Whincup controlled the race from start to finish to claim his eighth race win of the 2013 V8 Supercars season and his first victory in a Holden at Queensland Raceway, having only won previously here in a Ford Falcon under the TeamVodafone banner in 2009. Today’s success also marks a huge turn around in form for Red Bull Racing Australia who struggled for pace in Townsville three weeks ago and hands Holden the 2013 V8 Supercars Manufacturers Championship with 14 races still to be run.

Fellow front-row starter, Scott McLaughlin (Fujitsu Racing GRM) kept Whincup honest throughout the 40-laps to take second. McLaughlin was unable to mount a serious challenge for the top-spot, but came under pressure himself in the closing stages when Mark Winterbottom (Pepsi Max Crew FPR) launched a late-race attack after contact by Craig Lowndes (Red Bull Racing Australia) on the opening lap dropped him from third to sixth.

Lowndes appeared to hit Winterbottom in an ambitious move at turn three, which in turn also punted Fabian Coulthard off the circuit and down the order from third to fifteenth. The incident was investigated after the race and the Stewards imposed a two Grid Spot penalty on Lowndes for Race 23.

During the 15-minute ‘half time’ break, Erebus Motorsport were given permission from officials to change the brakes on Maro Engel’s SP Tools racer. Normally not allowed under the rules, they were able to satisfy the requirement that there was damage to the brakes and they were not performing sufficiently.

Following the rolling restart, the top four remained the same and started to open a small margin over the field, but the second half opened with some of the characteristic opening lap carnage seen recently when Todd Kelly (Jack Daniels Racing) shunted David Wall (Wilson Security Racing) off track between turns four and five.

Jonathon Webb (Team Tekno Darrell Lea) also had an early drama, coming off track at turn six and sliding straight into the pit entry for the first of two pit stops in the twenty lap dash.

After what had been a promising start to the weekend for Erebus Motorsport, IRWIN Racing’s Lee Holdsworth again found himself in pit lane for his fourth straight DNF of the season with broken right front suspension following contact with Dean Fiore (Dodo Insurance Racing) and Michael Caruso (Norton 360 Racing) on lap twenty-one. Caruso also toured the lane with damage to his left rear, but was able to re-join the race. Holdsworth’s team-mate Tim Slade (Heavy Haulage Racing Australia) then earned a mechanical black flag for loose body work and a trip through pit lane to effect repairs on the car, dropping him down the order to 24th.

In the battle for tenth Chaz Mostert (Wilson Security Racing) was the victim of a wild move by Todd Kelly on the last lap. Mostert was punted off track and spun around at turn six, dropping the rookie down to twenty-third position and leaving Kelly to face a post-race investigation. After an admission of careless driving by Kelly, the Stewards docked the Nissan Altima driver 25 Championship points.

At the conclusion it was Whincup ahead of McLaughlin, Winterbottom, Lowndes and Courtney. Will Davison, Bright, Garth Tander (Holden Racing Team), Alex Davison and James Moffat (Norton 360 Racing) completed the top ten.

Whincup (1691) has now extended his championship lead to 131 points over Lowndes. Will Davison sits in third, 247 points adrift with Winterbottom (-268) and Tander (-329) rounding out the top five.

The V8 Supercars are back on track on Sunday at 0935 local time for the first of two qualifying sessions ahead of two 100km races.