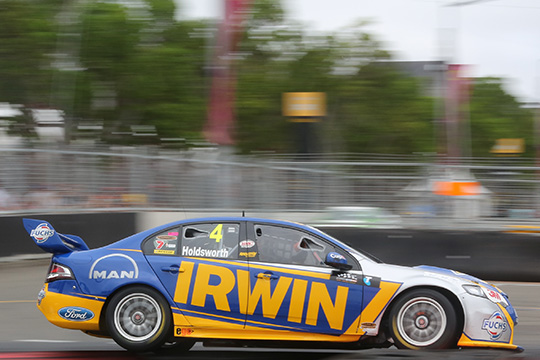 Lee Holdsworth has finished his debut season aboard the IRWIN Racing Ford with eighth place in the championship standings after today’s race in Sydney.

Starting 17th, Holdsworth moved his way up the order during the early laps when the Safety Car was called for two separate incidents. From lap #11 to #74 the race ran without interruption and Holdsworth battled not only those around him, but also lapped traffic.

Over the closing laps he fell behind Reynolds in the standings, but on the very last lap made up a vital position to round out his championship standing.

The race in Sydney was the end of the current V8 Supercars regulations. With new rules from 2013 the IRWIN Racing crew will switch to an Erebus-backed AMG Mercedes entry.

The first race of 2013 will be the Clipsal 500 on the first weekend in March.

What Lee Holdsworth had to say……

“At the end of the day eighth in the championship is pleasing for my first year with the team,” said Holdsworth.

“This weekend in terms of our performance and results has been disappointing, but we had to keep our eye on the championship position. Unfortunately I couldn’t move up, but we had to defend those behind.

“It’s been an at times tough year, especially in the middle of the season, when we struggled to get on top of the car. I’m looking forward to getting a fresh chassis next year in what will be a new ballgame in V8 Supercars.

“We have the opportunity to mix it with those up the front next year, especially with the resources that will be put into the new programme. It is a big job for everyone involved, including myself, but everyone is excited with what we will have on track for 2013.”