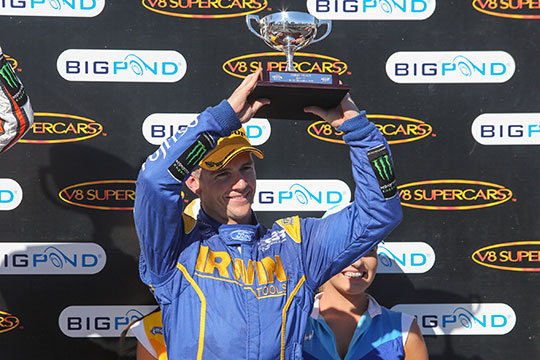 Lee Holdsworth has scored his first podium finish aboard the IRWIN Tools Ford with a thrilling third place in the opening race at Winton Motor Raceway in central Victoria.

Holdsworth charged over the closing 10 laps to be on the back bumper of Mark Winterbottom, when he pulled past at the line as the fellow Ford driver ran out of fuel.

It was the culmination of a strong day for the IRWIN Racing crew after Holdsworth qualified the car in sixth position.

Choosing to start on the harder Dunlop race tyres, Holdsworth made a good start before a Safety Car was called for two cars (Jason Bright and Michael Caruso) going off on the opening lap.

A flurry of pit stops saw the majority of the field switch immediately to the softer race tyres, while Holdsworth stuck with his harder Dunlops.

Although he came under attack from the soft tyre runners, he only dropped back to seventh place before the cycle of pit stops saw him put the softer tyres on with 25 laps to run.

Rejoining in 12th, he picked cars off cars over the remaining laps until he caught Winterbottom with three laps remaining. With no fuel issues to worry about, he then pressed Winterbottom, and tried to pass on the second last corner but was unable to complete the manoeuvre.

On the charge to the line Winterbottom’s car coughed and Holdsworth took the position by just half a car-length.

The result is Holdsworth first podium since the Sunday race at the Gold Coast in 2011.

The IRWIN Ford will be back on track on Sunday for qualifying and a longer 200km race in the afternoon.

“We are stoked we have been waiting for a podium all year,” said Holdsworth.

“We had form at the start of the year, went south in the middle of the year and then found qualifying form at Abu Dhabi, which when added to our race pace put it all together here today.

“In the middle of the year we were experimenting a little to make up the ground to Triple Eight and FPR. We have got back to basics and really worked on what we have and that is now starting to get the results we knew we should have been scoring.

“Hopefully we can push for some really decent results in the last few races of the year.”