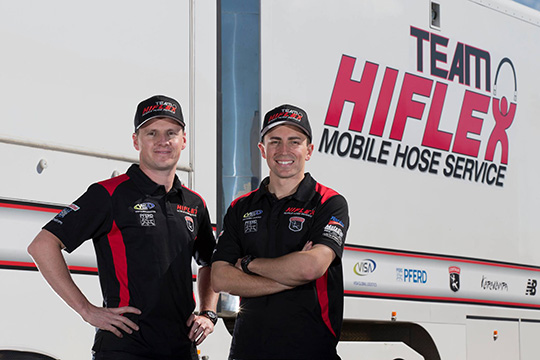 Jonny Reid will make a return to V8 Supercars alongside Tony D’Alberto in the battle for this year’s Endurance Cup.

Reid takes over from Nick Percat for the Sandown 500, Bathurst 1000 and Gold Coast 600 events after Percat was recalled to the Holden Racing Team fold.

Reid had started the 2013 main-game season in the #12 Dick Johnson Racing Falcon, but following a tough start was replaced by Chaz Mostert after just three championship events.

The New Zealander who hopes to make a full-time return to V8 Supercars is relishing his chance to get behind the wheel of the #3 Team HIFLEX Commodore.

“This is a great opportunity for me and I can’t thank the TDR enough,” said Reid.

“I’m totally ready to give this 100 percent. It’s a really exciting opportunity. TDR is a good, strong team with great equipment and the right attitude.

“Tony has showed some really promising speed of late, so I’m joining them at the right time. It’s an exciting adventure to be a part of.

“I get to drive the Commodore for the first time tomorrow at Queensland Raceway, and that’s going to be all about getting up to speed, focusing on learning the new car and adapting to it.

“I’m really amped and really upbeat. It’s a great opportunity to show what I can do.”

Reid will join the team this weekend at Queensland Raceway for Friday’s endurance driver session, and D’Alberto is delighted to have secured Reid’s services.

“Jonny is a quality, professional race driver and we are very pleased to have him in our team,” said D’Alberto.

“You only have to look at his resume to see that he is one of the best co-drivers. He has done a lot of racing around the world and he has been very competitive in everything he has been in.

“After starting the year with DJR, Jonny is keen to get back in a V8 Supercar and show what he can do. He knows we’ve signed him to do a specific job for us, but at the same time, he really wants to put some solid runs on the board.

“Jonny will get his first drive in our car on Friday (tomorrow), and it won’t take him long to get up to speed. He has had experience in Car of the Future. And I can’t see our car being too different to what he has already driven.”