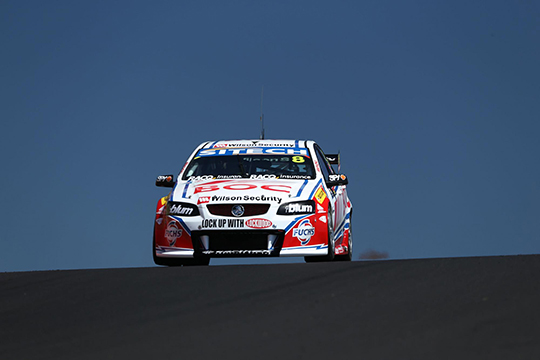 Watching your co-driver qualify for the Bathurst 1000 is stressful enough but Team BOC’s Andrew Jones had a particularly nerve-racking session on the sidelines today.

Engineers kept lead driver Jason Bright in pit lane until the dying seconds of the 40-minute session, giving him just one chance to register a qualifying lap.

Glued to the sector times, the team were predicting a top-four result for Car 8 after the first half of the lap but Bright crossed the line P12 after being held up by Michael Patrizi.

He will therefore sit out tomorrow’s Top Ten Shoot-Out at 4.30pm.

Andrew Jones
Team BOC Co-Driver
“I thought for sure we’d be in the top five. Our car’s been fast all weekend; that’s a fact. Brighty’s time on that last flyer was 0.06 faster than Fabian (Coulthard)’s and he’s P2.

“Granted we had to finish the lap but for me, in a qualifying session like that, we’re all told you need to look out for guys with their lights on. To be honest it doesn’t surprise me at all that Patrizi decided to get in Jason’s way. Hopefully we just drive away from him on Sunday and he won’t be able to affect us any more.

“Throughout the six-and-a-half hours of the race we’ll move forward; starting P12 isn’t going to determine our end result. We’ve just got to get through the first half of the race and then Brighty and I have very good speed relative to the other pairings.”

Jason Bright
Team BOC
“I think we’re looking good for the race on Sunday; the car’s doing it pretty easy. I’ve been up there every session and Andy’s driving extremely well. We’ve got a good race car so now we’ve just got to get the strategy right.

“The brakes were very different in qualifying to what we had in practice, which caught me out a couple of times, but they were alright by the end of the session. Our final first sector was my quickest of the session and I was 0.3s up on my quickest lap at Skyline. That would have put us pretty close to the top four.

“I’m extremely frustrated about what happened then. Michael Patrizi just waited for me; he was a long way in front but slowed up so he definitely got in my way. He had plenty of opportunity to move.”