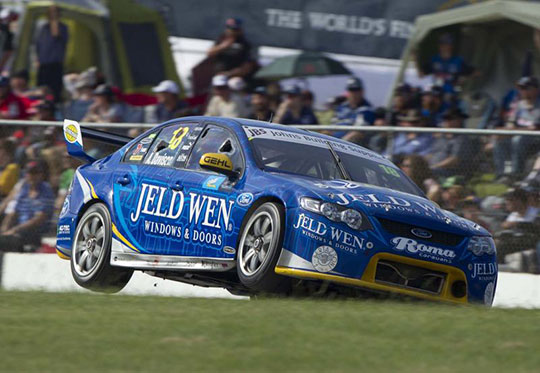 John McIntyre will pair with Alex Davison in the #18 Team JELD-WEN FPR Ford for this year’s V8 Supercars endurance races at Sandown, Bathurst and the Gold Coast.

McIntyre was offered the seat after FPR protégé Chaz Mostert, who was originally set to share the Ford Performance Racing-prepared entry with Davison, stepped into a full-time V8 Supercars Championship ride with Dick Johnson Racing.

A long-standing Ford driver with three New Zealand touring car titles and a NZ V8 SuperTourers Sprint Series to his name, the Kiwi is excited to continue his relationship with the factory team after last year partnering Alex’s brother, Will at Sandown and Bathurst.

”I am really looking forward to driving with Alex as he is always one of the drivers in the mix at the end of these long-distance races,” McIntyre said.

“He and the team have been making obvious progress all season since they joined the series and I think we should be strong at all three tracks.

“I’ve worked with Campbell Little before and obviously was with FPR last year so it will be a familiar environment which always helps. The new-spec V8 Supercars have distinct similarities to the SuperTourer I race so that should aid my transition to the new cars.

“I’d also like to thank Charlie for the opportunity as his seat was definitely the best one available and I look forward to what Alex and I can achieve together.”

“I am thrilled to bits to have John join Team JELD-WEN and I am sure he will do a great job for us,” Schwerkolt said.

“Alex has always been consistent and quick at the endurance races and it is all about being there in the closing stages so no matter which driver we paired with him, car 18 was going to be a contender.

“But with John in the car we have two very experienced drivers that know the team and the tracks so it gives us a great chance of gaining high overall results.”

The first of the three Endurance Cup rounds is the Sandown 500 in September.