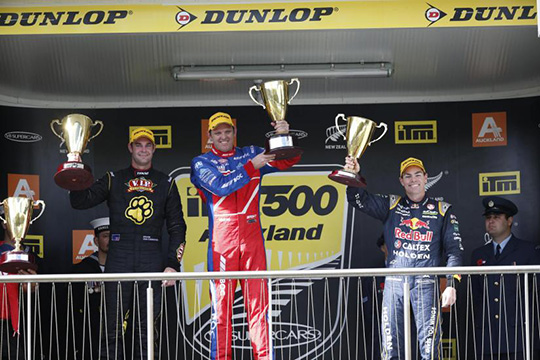 Jason Bright benefited from Jamie Whincup’s mechanical misfortunes to record his first win of the season in the opening race of the ITM 500 at Pukekohe Park Raceway.

Starting from pole, Bright lost out off the line to Whincup and Red Bull Racing appeared to be back to winning ways after his perfect start enabled him to control the early laps.

Whincup’s lead was untroubled following a safety car period, but a power steering issue on lap 12 saw him falter and run wide at turn 1, handing the race lead to Bright. Forced to pit, Whincup returned to the track on a points rescue mission but the damage had already been done as Bright remained untouched at the head of the pack, claiming the chequered flag over Tekno Autosports’ Shane Van Gisbergen and Red Bull Racing’s Craig Lowndes.

The big battle through the middle and towards the end of the race was between Garth Tander and crowd favourite Scott McLaughlin for eighth as the Valvoline Racing GRM driver attempted to regain some positions after getting squeezed out at the new turn 5, 6 and 7 complex on the first lap. Lap 19 saw a bold move from McLaughlin at the hairpin which was briefly successful until Tander crossed back under him. Mclaughin’s next attempt saw him straight-line the chicane on the back straight after leaning on the rear brakes which meant he had to give the position straight back. Tander finally relinquished the position on lap 24, after a mistake at turn 5 allowed the Volvo through. Tander went on to finish ninth, while Norton Hornets’ James Moffat rounded out the top ten.

The race ran to its time limit after a lengthy early safety car period to recover David Wall’s stricken Wilson Security Racing Falcon. Contact with Ford Performance Racing’s Chaz Mostert spun Wall into the fence at the high speed turn 10. The incident will be investigated after the race.

There was more action at turn 1 after rear tyre damage saw Dale Wood plough through the infield in lap 15.

Percat and Winterbottom battled for 6th and 7th throughout the mid-section of the race with Frosty’s chase coming to an end after spinning at the turn 8 hairpin on lap 31 which saw him trundle home in 13th.

Despite the spin, Winterbottom was the first Ford home in 13th, while the remaining Nissans were 16th, 17th and 20th. Mostert closed out a disappointing day for FPR with a 21st place finish while the second Volvo of Robert Dahlgren was the last car on the lead lap in 22nd.

Dale Wood finished a lap down after his off track excursion and Whincup was the last of the finishers in 24th.

Wall was the only one who failed to finish after the early race incident with Mostert and has been ruled out for the rest of the ITM Auckland 500 weekend with the structural damage to the car deemed to great to repair,

Lowndes’ third place finish helped to retain his championship lead over Winterbottom and Coulthard heading to the weekend’s three other races.