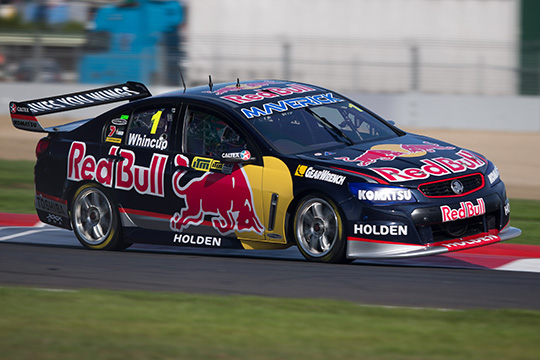 Jamie Whincup survived a last lap scrap to win his first race of 2013 in the second V8 Supercars ITM 400 Auckland race at Pukekohe.

Whincup came under attack in the closing laps of the race from Mark Winterbottom and had to take to the grass after Winterbottom made contact attempting a move down the inside of the Red Bull Holden. Both speared off but Whincup resumed the lead while Winterbottom salvaged 13th after spinning out.

“It was a tough race to start the day in race one – we don’t seem to have much luck here – but the win certainly takes the sting out of that,” said Whincup.

“But I’ve finally got that race win which feels good because everyone all week has been asking me about when I was going to win one. I’m pretty happy to get our first win of the year – especially after the first race drama. I used the curb out of turn four like I normally do and it popped the tyre off the rim and ended my race. All I was thinking was ‘There goes 80 points’, you know. But we’ve got the win now and the car feels a lot better than last week.”

Will Davison finished second ahead of Garth Tander, after polesitter Fabian Coulthard had a 10-second penalty added to his time for a jump start that dropped him from second to 10th place.

Jason Bright took fourth ahead of David Reynolds, after coming through a wild incident on lap 19 involving sixth-placed Shane van Gisbergen and James Courtney going into the first corner. Contact with Bright pitched Courtney into the gravel trap and into retirement while Race 6 winner Scott McLaughlin was forced through the grass at high speed.

The weekend will conclude with a further two 100km races on Sunday.