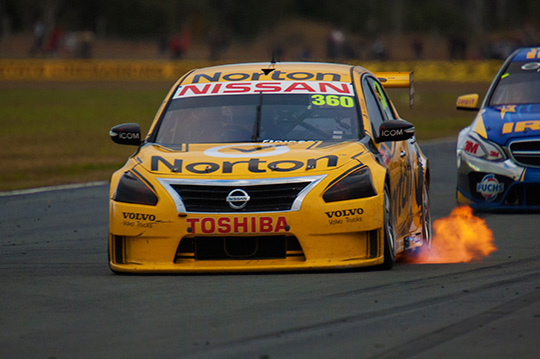 James Moffat will remain with Nissan Motorsport after extending his deal with the factory Nissan team for a further three years.

After two seasons with Dick Johnson Racing, Moffat joined the newly formed Nissan Motorsport team in 2013, and has so far been one of the most consistent performers in the championship, taking the #360 Norton Hornet Nissan Altima to seven top 10 race finishes and recording  only one ‘DNF’ from the first 24 races.

“I’m very happy to say that I’m going to be here at Nissan Motorsport for another few years at least, and nice to lock it away relatively early,” said Moffat.

“I’m looking forward to the future. It has been a massive undertaking for everyone involved to get Nissan Motorsport to where we are at this stage. I feel like the future holds some promising things.

“My intention was always to stay with the team and luckily they felt the same way about me staying here.

“I can’t wait to get into rest of this season, starting at Winton this coming weekend, and then the following few seasons.

“It’s never easy having year-by-year deals and not knowing exactly what you’re doing the following year. To be able to lock away a deal that gives me some security is nice, but at the same time, we know there’s still a lot of work ahead of us. I know there’s plenty of promising signs within the organisation, and that made my decision to stay an easy one.

“The fact that the team wanted to keep me was positive, because you’ve both got to want to work together, and having continuity in the program should only make us stronger.”

Moffat has already scored more top-10 results in the first part of the season than he achieved throughout 2012, a key component in retaining his services according to Nissan Motorsport chief executive officer John Crennan

“First and foremost, his on track performances have been a key factor in Nissan Motorsport re-signing James on a multi-year deal,” said John Crennan.

“Secondly, he has displayed an added level of driving maturity this year, and the proof of that is his passing record. He has passed more drivers in race conditions than any other this season.

“Thirdly, and most importantly, James has turned out to be an outstandingly good fit into our organisation. He is very well suited to the culture of our business and people. He is popular amongst our staff and sponsors and conducts himself at a high level. He is a team player and a really great fit into our team.”