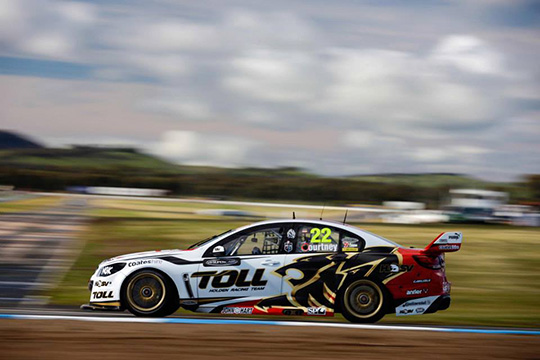 Holden Racing Team’s James Courtney has won the dramatic final race of the Winton 360, ending a win drought that stretched back to February 2011.

Courtney led away from pole and avoided the dramas which unfolded behind him, finishing 2.8s clear of Lockwood Racing’s Fabian Coulthard to become the 12th different winner of the 2013 V8 Supercars Championship season.

With ten laps to run, Coulthard pitted for fresh tyres under the third of the race’s three safety car appearances, charging through from 13th to grab second from Chaz Mostert on the final lap.

The Safety car made its first appearance on lap one after Jamie Whincup (Red Bull Racing Australia) made contact with Todd Kelly (Jack Daniels Racing) on the run to Turn 1, sending Kelly into the wall on the right hand side of the track. As the field circulated under the full caution, Scott Pye (ekol Racing) entered pit lane, running off into the grass as a fire erupted around the left rear of his Commodore. Crews were quickly on the scene and Pye escaped unharmed, but his car was wheeled into the garage where it remained for the rest of the day. After he failed to finish either of the first two races, Whincup’s salvaged much-needed points finishing 13th.

The race restarted on lap five, with twenty-five cars remaining on track after Russell Ingall failed to start due to damage to his Supercheap Auto Commodore. Maro Engel (SP Tools Racing) was then knocked off track at turn two by Jonathon Webb (Team Tekno Darrell Lea) four laps later and although stewards launched an investigation into the incident, no further action was taken.

The Safety car was again deployed on lap twenty-three after an altercation between Mark Winterbottom (Pepsi Max Crew) and Rick Kelly (Jack Daniels Racing) saw the Nissan driver shunted off at turn five, sliding across the infield where his car came to rest bogged in the mud, but thankfully upright. A host of drivers in the back half of the field elected to pit for fresh rubber, emerging from pit lane in two waves.

With nine laps remaining the race restarted, only for the safety car to emerge again just two laps later when Jason Bright (Team BOC) went off at turn eleven attempting a move on Will Davison, hampering any advances those on fresh rubber were hoping to gain.

The race restarted on lap 29 sparking a thrilling sprint to the finish.

Coulthard led the charge with Garth Tander following, but the Holden Racing Team driver was unable to find a way past Wilson Security Racing’s Chaz Mostert, who hung on to third by just 0.2s.

After a strong showing on Saturday, Sunday wasn’t to be Michael Caruso’s day. After retiring with a broken lower control arm in the rear suspension in Race 26, Caruso’s race was cut short on the last lap when Craig Lowndes (Red Bull Racing Australia) made contact with the Norton 360 Racing Nissan at the exit of Turn 10. Lowndes went on to finish tenth, but following a post-race investigation, was docked 25 Championship points, demoting him to fourth in the standings.

There is no change at the top of the Championship with Whincup still leading on 1847 points, but with Lowndes’ points deduction dropping him down two places, the gap between the two team-mates is now 72 points. Will Davison and team-mate Mark Winterbottom move up to second and third respectively, with Davison 55 points behind Whincup a further 15 points back, while Coulthard remains in fifth, 138 points adrift.

The V8 Supercars head to Melbourne next for the start of the PIRTEK Enduro Cup on 13-15 September.